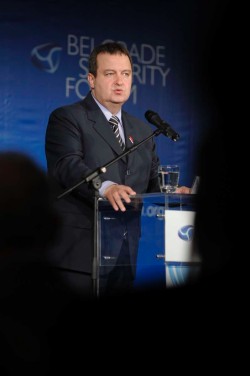 During the keynote speech at the Belgrade Security Forum 2012, Serbian Prime Minister Ivica Dačić said that his government’s endeavour is to “build new bridges toward the countries in the region, and the institutions in Priština”.

“Serbia is committed to giving its full contribution towards establishing and improving relations with its Balkan neighbors,” Ivica Dačić stated. He said that the situation in Kosovo and Metohija is potentially the greatest source of the country’s instability, and that the military and civilian presence in Kosovo remains the guarantor of the peace. The recognition of Kosovo and Metohija by some regional countries is attributed to more complex foreign policy circumstances, and a distancing from dialogue,” he said. 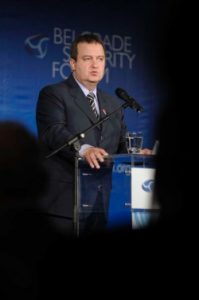 The Serbian position on this question is based on respecting UN Security Council Resolution 1244, and Serbia’s legal order, the Prime Minister explained.

According to Dačić, talks with Priština will continue with the goal of finding solutions to the problems of the citizens who live there. He stressed that Serbia believes the truth must be determined in all war crimes cases.

Mr. Dačić pointed out that the European Coal and Steel Community was formed just ten years after World War II, but that today, twenty years after the wars and conflicts in the Balkans, “we are still living in the past” and have not formed a joint Balkan Council similar to the Nordic Council.

On the topic of regional cooperation in the context of European integration, Mr. Dačić pointed out that citizens of Serbia can travel with identity cards, not passports, to Macedonia, Montenegro, and Bosnia and Herzegovina, but that talks on this initiative must be renewed with Croatia. Due to the country’s impending entry into the EU, “Croatia seems disinterested in maintaining relations with other countries in the region,” Mr. Dačić remarked, but observed that Croatia’s interest in granting passport-free travel to Serbian citizens is greater than Serbia’s, due to the possibility of increased tourism from Serbia.

Mr. Dačić continued that citizens of Serbia and the region recognize the importance of cross-border cooperation, stating, “The Republic of Serbia will strive to promote peace, stability, and reconciliation in the region since citizens are tired of wars, conflicts, and unnecessary victims. We must have policies that will promote the legitimate interests of all people living in the Balkans.”

“Southeastern Europe is a large geo-strategic space, and we all have our responsibility. Any inhibition of integration processes increases the risk of instability,” Dačić concluded.