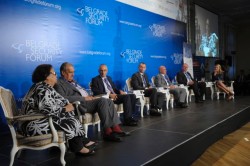 The participants of the first main panel “The Benefits of Regional Cooperation” of the Belgrade Security Forum agreed that the enlargement process of the EU must be continued and that global security is an unsustainable concept and reality without substantial regional cooperation.

Europe should be focused on development of cooperation, advised Mr. Karel Schwarzenberg, Minister of Foreign Affairs of the Czech Republic addressing the participants at the beginning of the panel.

He said that the countries of the Balkan region have mutual interests and highlighted the cooperation between Hungary and the Czech Republic, which is in his opinion better than ever before due to intensified regional cooperation. “This successful example shows the importance of overcoming prejudices inherited from the past. This is why we have to start to work on ourselves”, Mr. Schwarzenberg said.

Mr. Janos Martonyi, Minister of Foreign Affairs of the Republic of Hungary indicated that the breakdown of communist regimes in Europe reoriented these countries towards Euro-Atlantic integration. “We were all aware that security is number one issue and that it could be accomplished only in cooperation with the neighbours. Because of this it was important to establish a mechanism for regional cooperation.

He underlined the importance of regional cooperation in terms of joining the European Union and NATO from the experience of the Visegrad group that played significant role in the accession process of these countries which finally turned to one another in order to improve trade and security in this region.

Therefore, the cooperation within this group should be continued. “We ought to accelerate the EU enlargement process, but this does not mean that we should exclude the regional cooperation because, after all, security starts in your neighbourhood. Without regional security there is no global security”, Mr. Martonyi noted.

Mr. Nikolay Mladenov, Minister of Foreign Affairs of the Republic of Bulgaria remarked that there are many common issues such as fight against organized crime, establishment and connecting of all kinds, and especially energy infrastructure as well as many others, and thus it is in Bulgaria’s interest to have all its neighbors as EU member states. Also, it is important to come to a solution on all bilateral questions inherited from the past. Having all this together will make another war in the Balkans almost impossible.

“You should be aware of the importance of the reconciliation process and especially Serbia’s efforts and accomplishments regarding Croatia and Bosnia and Herzegovina. The only role Serbia should play is the one of an EU member country. Everything else is a myth and that is a reality”, stated the Minister of Foreign Affairs of Bulgaria Nikolay Mladenov. He remarked that a common legislative in the accession process is not enough and that there are other things that should be worked on because laws cannot cover all realities, adding that the EU negotiation process changes the way in which a country is functioning.

Mr. Stefano Sannino, Director General in the Directorate General for Enlargement of the European Commission said that the EU is looking for the best approach to integrate the Western Balkans to the Union. Underlining the improvement of regional cooperation in this region, regardless of the differences in the accession processes in each of these countries, they share the same characteristics and problems which is more than a solid ground for cooperation enhancement.

He also agreed with the earlier statement of the Serbian president Boris Tadic who stated that mistakes from the past must not be repeated and that the region is now finally a success in making.

Mr. Milan Jezovica, State Secretary of the Ministry of Foreign Affairs of the Slovak Republic also stated that a mutual support within the states in the region is of outmost importance.