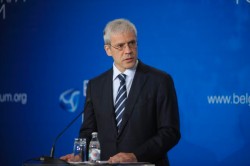 “Unilateral actions of Pristina could seriously endanger the peace and stability in the region. This must be stopped”, Said Mr. Boris Tadic, president of the Republic in Serbia said during the Key note speech at the first Belgrade Security Forum in Belgrade.

At the beginning of the conference titled “Balkan and Global Security – what do we have in common, what set as apart?”, Mr. Tadic stated that the only acceptable solution for the Kosovo is the one that would come from the dialogue within which differences could be overcome.

He warned about possibilities of escalation of violence in many countries in case of Kosovo proclaiming and demonstrating independence and that that precedent will make future relations among states unjust. Legitimation of Kosovo precedent will impose more instability and less security in the region.

“Events on Kosovo harshly injured foundation of international relations, and if it proceeds, international system will be permanently defected”, Mr. Tadic stated and emphasized that these circumstances would give legitimacy for violent secede and violations of borders of one sovereign state.

He also said that organized crime is one of the biggest challenges for the state and for the region and that Serbia will not spare the efforts in order to eradicate these threats.

President of Serbia concluded that the Western Balkans is a story of success in development and that those relations in the region have never been better and that process of conciliation will be finished.