Plenary Panel opening the second day of the Belgrade Security Forum titled Reaffirmation of OSCE’s Role in Conflict Management heard eminent speakers views on several important questions regarding common OSCE vision for the Euro-Asian area; its influence managing the crisis in Ukraine; as well as the effectiveness of Serbian chairmanship, thus layering the discussion on overall relevance of the OSCE today. 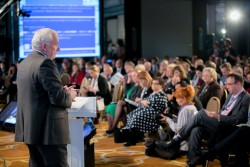 Amb. István Gyarmati saw the OSCE as a wonderful and flexible tool put in the right hands. What is lacking is the knowledge how to deal with old and new problems, e.g. Russia and refuge crisis. “We are not able to invent new tools and there is no intention to do that, so we need to use already existing ones and work on political willingness.”

Focusing on experience from the field Amb. Jonathan Moore from the OSCE Mission to Bosnia and Herzegovina said that Mission is especially dynamic on local level where it has big credibility. He stressed the importance of strong guidance coming from both old and current chairmanship-in-office: Switzerland and Serbia.

Amb. Gerard Stoudmann talked about OSCE’s values and vision in light of Russia’s and EU’s newly adopted assertiveness. OSCE’s role was hence reduced to a buffer. In this changed environment, the EU doesn’t see political role of OSCE as something they would encourage. In Amb. Stoudmann’s opinion the OSCE remained a tool depending of political will.

Amb. Roksanda Ninčić didn’t share these pessimistic views. After the Ukrainian crisis OSCE regained its importance, giving its expertise in crisis management as the only Pan-European transatlantic organization that has capacity needed. Ukraine Special Monitoring Mission was established very fast and they were the eyes and ears of international community on the field. Amb.  Stoudmann followed up by saying there was a difference between political will and political skill.

Teija Tilikainen said that it was general atmosphere that the OSCE was needed more than before and backed it up with research and conclusion saying the consensus is the source of legitimacy of organization. However, that it can get in the way, the OSCE institutions should be more autonomous, enabled and equipped to act.

Download Reviving Co-operative Security in Europe through the OSCE Contribution of the OSCE Network of Think Tanks and Academic Institutions to the Panel of Eminent Persons 2015 Edited by Teija Tiilikainen.

Audience also contributed by saying that there is no consensus on what is to be avoided and what is the lowest point we want to avoid. Also, it is observed that OSCE has capacity to resolve political problems, but only whit given power by states. It has been emphasized that if we are talking about dialog platform we must expecting dialog process. We must revive cooperation in Europe where it has been already achieved, If we can’t do that, how can we deal with the rest of the world.