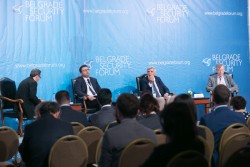 Panel emphasized the importance of differentiating between Islam and political Islam. Panelists assessed how there was no such thing as European Political Islam, as some populist parties would have it. Growing islamophobia will only make the situation worse. “Muslims are not coming, they are already here in Europe for almost 14 centuries”, said Ismail Yaylaci.

Participants also discussed secularism and eurocentrism. They criticized eurocentrism and called for a careful analysis of different countries dealing differently with religion issues. They noticed how secularism is defining trait of modernity in Europe, often used as universal concept. However, they noticed how the majority of Muslim denominations are condemning the violent radicalization of Islam. They highlighted the important role of religious institutions in educating against violence. The important fact that shouldn’t be forgotten is that ISIS is killing more Muslims, than Westerners.

Francois Heisbourg explained that despite the expectations Europe cannot hope to solve any time soon the Middle Eastern crisis caused by Syrian civil war and the rise of ISIS. He drew a parallel to the Lebanon civil war that lasted for 15 years, and the rise of parastatal actor Al Qaida, that was reduced only after an entire decade.

Some important solutions were proposed: regarding refugee crisis EU should establish a federal system which will grant rights to seek asylum and work legally, on the condition to learn the language of the hosting country. Otherwise, refugees not integrated in societies will provoke the rise of xenophobia and europhobia.

It was pointed out that Europe is still not quite in the game in the Syrian conflict, despite its economic capability, political influence. Concerns were raised on possibility of the EU countries siding with Assad.