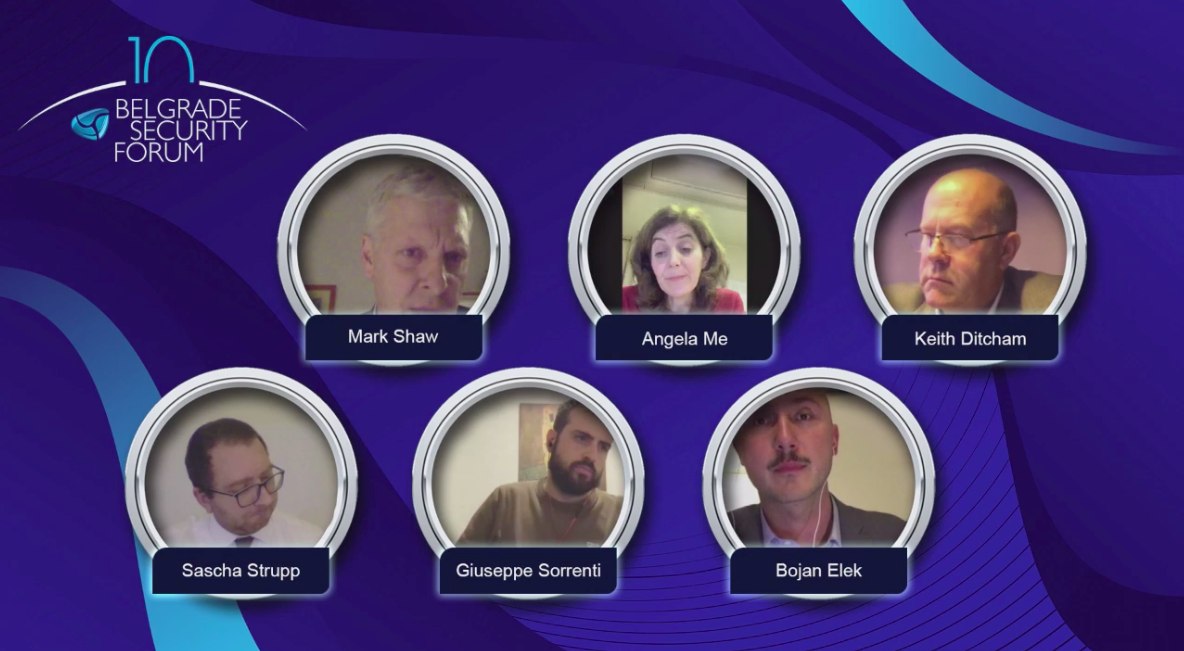 Unusual discussion on the effects of Covid-19 on several aspects of organized crime in Europe and the world took place in the closing of the third day of the Belgrade Security Forum 2020. The activities of the mafia during the Covid-19 crisis were in focus, but there was also talk of victims of organized crime and the most affected by the crisis. The panelists gave their opinions on ways towards the advancement of the fight against organized crime in general and the good sides of the crisis on that issue.

Sascha Strupp, Strategic Analyst with Europol, EU Agency for Law Enforcement Cooperation, noted that Covid-19 crisis shaped organised crime, in a way that nobody expected. He agreed that the data collected since the beginning of the pandemic show only the short-term impact of the crisis on crime. In his opinion, the criminals adapted to the new circumstances very quickly. He cited several examples, such as the counterfeiting of disinfectants, frauds during the delivery of medical devices, the transportation of drugs by planes that returned passengers from the destinations affected by covid, etc.

He also added that it is not possible to talk about an increase in organized crime during the pandemic, but that the data show growth in certain areas, such as property crimes, counterfeiting of some consumers good, corruption. What he especially emphasized is that certain criminal groups are much better organized after the pandemic and that their way of acting is more centralized and consolidated.

Keith Ditcham, Senior Research Fellow and (Acting) Director of RUSI’s Organised Crime and Policing Research Group, spoke about the situation in the United Kingdom related to the epidemic and organized crime. He concluded that Covid-19 represents the biggest policing challenge since the Second world war for the UK. However, he believes that the final impact cannot yet be determined or predicted, because Covid isn’t over.

He pointed out that there is a phenomenon of diversification of organized crime in Great Britain, especially in the field of cyber security. Part of the activities of criminal groups have shifted to online crime. Also, rising unemployment creates a vulnerable population, susceptible to becoming a victim of crime, primarily through the purchase of counterfeit goods.

On a macro-scale, we’ll see the impact on investment, unfair competitions, high levels of organized crime infiltrations and list of activity count for the much larger share of gross domestic product.

Giuseppe Sorrenti, Assistant Professor of Economics at the Amsterdam School of Economics (University of Amsterdam), believes the crisis was an opportunity for organized crime to flourish. He cited three examples of organized crime during pandemic, primarily in Italy, such as the infiltration of criminal groups into the wider population by providing assistance to the most vulnerable communities during the crisis, the emergence of new forms of crime such as the counterfeiting of medical equipment, also a large part of the EU funds is directed to the states in order to fight the crisis, and the mafia is trying in every way to get a part of these funds.

He also pointed out that certain regions of Italy fared much better during the crisis due to the activities of the mafia, because it invested funds and helped entrepreneurs.

Mafia is acting like substitution of the institutions by providing some kind of welfare service, as a type of social insurance for a certain group of entrepreneurs.

Mark Shaw, Director of the Global Initiative Against Transnational Organized Crime, highlights the role of civil society organizations in the fight against organized crime, especially at the local level. He reiterated that the mafia had a role to play in helping the most vulnerable in certain areas and added that in many parts of the world, such as Brazil and parts of Africa, it acted openly. He sees a greater symbiosis and infiltration of the mafia into government as a result and consequence of the pandemic.

Angela Me, Chief of the Research and Trend Analysis Branch at the United Nations Office on Drugs and Crime, added that it is important to determine which are the most vulnerable sectors that can fall under the influence of crime. She expressed fears that branches such as tourism and transport, and health sector became very vulnerable to mafia infiltration during the pandemic. According to her, rural communities have always been weak to the influence of the mafia, and the economic crisis during and after the pandemic further increases the areas of crime in which these communities participate or are affected.

She also pointed out the bad impact of the epidemic on drug users, it was much harder to get drugs, while the health sector could not achieve treatment for these people, so some of them turned to mafia much more.

The invisible victims of crime during the pandemic are the economy and the public sector, and with it the most of population.