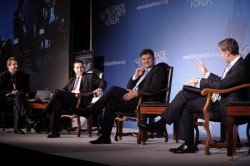 The opening panel of the second day of Belgrade Security Forum 2013 was dedicated to the delicate dynamic between state building and the European integration processes and challenges it produces in the Western Balkans countries.

„We are currently at the threshold, the political will exists, enforced by the technical efforts of the experts“, said Ruzic. He thinks that in the long-term Serbia will only have advantages from the EU membership, „I don’t see why would there be 28 members if the organization was no good“, Ruzic pointed out. He acknowledged that there are challenges and obstacles on the way, lack of finances for reform and adjustment processes being one of the major ones. Also, one of the main goals of the Government is to explain to media what will common citizens get from the EU membership.

He commended the decade long efforts of the European Integration Office (SEIO) that prepared the country for accession. On answering the question which EU chapters could be critical, he said that everything is equally important and that nothing should be singled out. With it, he is sure that the Serbia will be stronger as the integration process goes on.

Panelists, Miroslav Lajcak, Deputy Prime Minister and Minister of Foreign and European Affairs of the Slovak Republic, and Julian Braithwaite, UK Representative to the EU Political and Security Committee agreed that Serbia is moving ahead. They stated that it is encouraging to see that Serbia has clear European perspective which is reflected in strong political will to integrate into the EU and find solutions to implement reforms.

Lajcak said that there is no reason to worry whether the Serbia will lose its independence and identity in the process of the EU integration. He singled out two crucial factors that support the integration processes: tangible perspective of the EU integration for the whole region and efforts of maintaining EU as a model for others to strive to through developing and exercising its soft power.

Braithwaite stated that the EU is a fantastic state building project, but has its limits: „It is not the EU that builds states, it’s the states that build states. But the EU has a crucial role in state stabilization. EU has brought an end to the process of state building because they clearly define borders that won’t change, except in a democratic way. Also, EU is important for Serbian communities in Croatia and Kosovo because of its structure – when there are no borders and where identities are not bound by borders of nation states. At the same time there is enlargement fatigue and concerns about migration, and Serbia must not give EU excuse not to let her in.