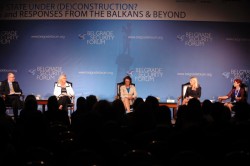 This year’s gender panel combined personal stories of the panelists with the role of state in dealing with gender issues. Resolution 1325, perception of gender issues and mechanisms of promoting the idea of an active role of woman in the security sector.

This plenary panel combined personal stories of the panelists with the role of state in dealing with gender issues. Speakers on this panel were Kolinda Grabar – Kitarovic, assistant to NATO Secretary General, Elisabeth Naucler, MP in the Parliament of Finland, Tanja Miscevic, Serbian Chief Negotiator with the EU‚ and Valerie Evans, head of DE&S’s International Relations Group IRG, MoD, UK. The panel was moderated by Daniel de Torres, DCAF deputy head of operations III. The backbone of this panel was the Resolution 1325 and its implementation in the region. It was emphasized that before this document was adopted, the only influence that women have had was through the civil society.

Ms. Grabar – Kitarović, Assistant to Secretary General in NATO brought out some numbers that support the fact that there are more women involved in the work of NATO. She has also mentioned that it’s her impression that the region is not doing bad when it comes to implementation of the Resolution 1325, better yet NAP of 1325. This mild optimism was shared by the other panelists. Ms. Grabar – Kitarović emphasized that it is important to promote the idea of an active role of women in the security sector, given the fact that women make a half of the world population, and as such could contribute in dealing with security issues. Her recommendations are to keep fighting for implementation of the Resolution 1325 through education, raising awareness, creating political will, influencing values, supporting and encouraging ambition in women.

De Torres stated that: “Women’s issues are not issues for women only” – a position that came up during the session several times.

Ms. Naucler shares Finnish perception of gender issues. Even though Finland came a long way in this field, she expressed that there are still problems that need to be resolved. She stated that woman have to move from being victims to being leaders: “We need to protect women in war-torn areas but also move forward to build leadership among women”. Ms. Miscevic reminded the audience that the implementation of the Resolution 1325 in Serbia begun as an “underground” movement, and now is in the, which indicates that the progress has been made. But, on the other hand, she expressed her concern about feminizing professions and similar trends and necessity to stop ongoing process and prevent similar.

Answering the question about the sustainability of achievements made in this area Ms. Miščević expressed that, in Serbia, the point of no return has been reached, and that processes of dealing with gender issues may perhaps be slowed down, but they cannot be reversed. Ms. Naucler emphasized that sustainability is possible when the idea of gender equality is part of the society. Ms. Grabar – Kitarović said that it depends on environment. In regards to this, the question of quotas was brought out. Panelist made a consensus that it is their private disagreement with using the quotas, but that it is necessary in the beginning of the process in dealing with gender issues.

The panelists concluded that it is necessary to keep up with the implementation of the Resolution 1325 and to come up with new mechanisms of promoting the idea of an active role of woman in the security sector.