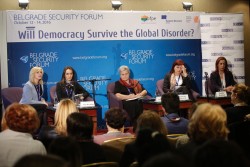 When women were invited to the event like Belgrade Security Forum, it showed they had come a long way, pointed out Sonja Lokar opening the meeting Follow Us: Women Promoting Peace and Security. “In politics, women are few and to do something different than men is dangerous. These women know what they are risking, and they are doing it anyway”, Lokar emphasized.

Dijana Vukomanović started by saying that even when women are not involved in politics, politics are involved in their lives. Politics are too serious for men to deal with on their own, she believes. There are all sorts of discrimination against women, but they should not allow themselves to be victims and should also show future generations not to be victims – women need to be encouraged to say ‘No’.  They also need to support each other more as their power is in solidarity. The 21st century belongs to women, she concludes.

Jeta Krasniqi said that the relationship between Serbia and Kosovo were not optimal, but that issues these countries were faced need to be resolved. Every woman in Serbia and Kosovo has a responsibility to help create a better future. She emphasized that the speakers aspire to change things, make progress, build peace, because they believe that the future should be different. There must be a fight for young women’s visions, for the common vision. Gender issues need to become priority issues. Everyone must be involved in order to empower women and men must be included in this process. 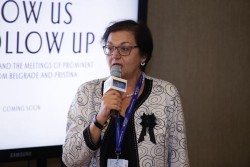 Dubravka Filipovski pointed out that when the panelists first met in Budva, they decided to talk about the things which are similar to them all, not about the differences. There is a necessity for female-male dialogue in order to answer the solve violence over women. She also stressed that women need to be economically independent. The Follow Us Initiative show that not dwelling on status questions is difficult, but possible.

Emilia Redžepi highlighted that when women started talking five years ago in Budva, their male counterparts and colleagues weren’t even saying ‘hello’ to each other. Nation and religion are irrelevant, what is important is that we are human, which is why it is important to change stereotypes which have been in place for centuries. The subject of violence against women has been taboo for years, but women must be free to talk about it in public in order to protect themselves.

Sonja Lokar concluded the event by saying that women in Serbia and Kosovo have been put through terrible experiences in the past, but at the same time expressed the belief that they came out stronger and unwilling to let the past repeat itself.