The conclusion of the Side Event: Post Paris, post Brexit – perspectives for Western Balkans is that new strategies are needed for Western Balkan region as “business as usual will not work anymore, and new recipe for enlargement is needed”, as Dušan Reljić stated. 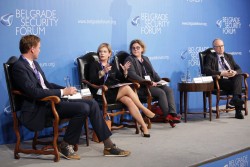 Panel was concluded with a remark that every crisis was also a chance and there was hope that leaders of Western Balkan countries can make some radical decisions and became best partner to EU in finding solution.

Framing the discussion moderator Dr. Florent Marciacq said that European Union is going thought some troubling times. It is not just about Berlin process and Brexit. European Union is faced with multiple challenges: from earlier economic crises to refuge crises, rise of populists, democratic backsliding etc. Dr. Marciacq opened the floor for panelists saying that we do not need to restrain from optimism even do we need to enlist all the changes and see all the steps in overcoming them.

Hedvig Morvai talked about new challenges and how they could affect the European future of Western Balkans, she argued that ascension process was on autopilot and it was still moving, but more from inertia. “Even though crises is not in the region itself, it could generate further problems between Western Balkan countries, since the EU is a driving force for reform”, Morvai warned. The solution could be in clear demonstration that Western Balkans countries can be significant partner to the EU in tackling these challenges, and region will need to show that it can continue without so much reliance on foreign actors. Morvai think the solution could be relaying on civil society sector in countries of the region. 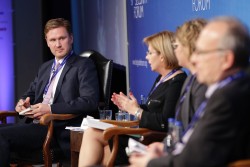 Dušan Reljić was questioning the reliance on the Berlin Process arguing that even if process would be completely successful, it would not resolve problems soon enough, saying that we need measures that can be immediately implemented to better the lives of people helping them become better Europeans. Reljić continued with examples that show how region is economically interconnected with EU saying we need more help now allowing infrastructural funds before becoming member helping countries become competitive in EU so they can become more important in chain of contribution.

Eleonora Poli talked about Italy’s goals as country that will host next summit saying that Italy is committed to see Western Balkan countries in core of EU countries who integrate the most.