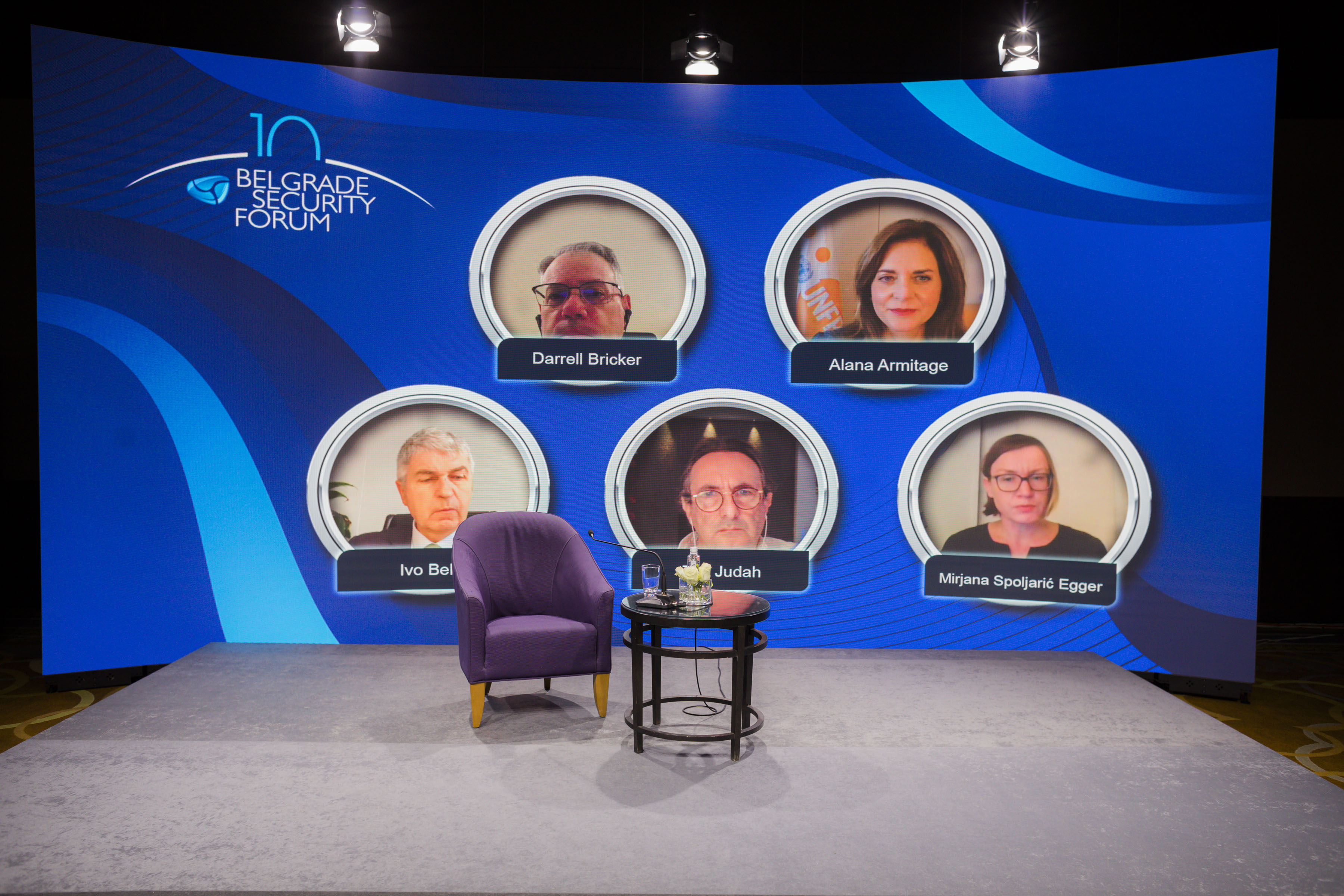 Moderator Mirjana Spoljarić Egger of the UNDP Assistant Administrator and Director of the Regional Bureau for Europe and the Commonwealth of Independent States, led a panel dedicated to the challenge depopulation poses before Europe and the Western Balkans in particular. It was agreed that the best way to address the issue was to build the countries in which people would want to live, through constant and multidimensional engagement in the creation of adaptable policies and creating opportunities.

In addressing the topic, Dr. Darrell J. Bricker, CEO, Ipsos Public Affairs, geared the discussion towards the fact that the fertility was a global problem and not related to only one specific country or region, as well as the population aging, since the change of the biologic processes was highly unlikely to happen. He added that the women education, as a significant part of the process of their empowerment, considering the fertility as a matter of a choice, also resulted in shrinking, aging and predominantly urban world population.

Ivo Belet, Deputy Head of Cabinet to Vice President of the European Commission in charge of Democracy and Demography, presented the EC’s clear focus on the issue of the elderly and increasingly urban population, through a specific policy confrontation. For the first time, the EC tributed a clear pioneering portfolio, which is a good signal, related to the tremendous climate changes and demographic decline not only in the Western Balkan region, but also the EU.

On the other hand, he stated the positive aspects of this story are longer and healthier lives in terms of the life expectancy. Since the EU is faced with the people who do not have enough children to guarantee stable populations in the future and having in mind the shrinking work age, which prevents from sustaining the economic growth in order to tackle all the challenges, the EC has launched a specific document as a basis for the broader consultations of all the relevant stakeholders. The main elements of this document are the very concrete and long-term policy proposals which should facilitate the processes of tackling the double challenge, the demographic decline on one side and the GDP increase on the other side.

Alanna Armitage, Director, UNFPA Regional Office for Europe and Central Asia, said that having in mind the provocative thoughts on the future developments and the positive sides of the same processes, we need to face the anxiety which prevails in countries such as France, which, contrary to the predictions, has a population increase, and Ireland, the third country in the world on human development index, which has the opposite situation.

Nine of the Southern-Eastern Europe countries are faced with the possibility to lose a quarter of their populations in the future, which can have dramatic implications. National governments increasingly recognize addressing demographic change as a top priority.

They are concerned how low fertility, migration, population ageing and shrinking populations will affect economies and the sustainability of social security systems, vital infrastructures and services, Armitage added. In order to build the vibrant societies and deal with many overlapping challenges, which have serious demographic consequences, the approach has to be holistic, working on the building competitive economies and sets of specific policies and a palette of innovative solutions, which will reduce the emigration and raise the productivity and attractiveness of the labor market and living environment.

Tim Judah, Journalist, The Economist, explained that in the situation of disputes, elections, corruption, environmental and economic issues in the WB region, the loses of populations becomes a very serious problem to be addressed. Nevertheless, the emigration of people from one EU country to the another, filling the low fertility gap in it, can have important political consequences.

We need to understand the multiple reasons of people leaving or staying in one country.

As a result, Judah emphasized the necessity on strengthening a better working and living climate for people regarding the job security and education.

The panelists concluded that the best way to prepare for demographic futures, which is also influenced by the vulnerability of countries to crises, as exemplified by the COVID-19 pandemic, is in dealing with the lasting effects of depopulation through strategic investments in human capital development and supporting future-oriented system transformation.