The last panel of today’s Academic Event titled Memory and (In)Security in the Former Yugoslavia discussed the construction of collective memories in the Former Yugoslavia. Memory was found to be powerful and useful resource often used by politicians to spin the debate from internal to external affairs. Failing to face the past contributes to the raise of insecurity in the region. 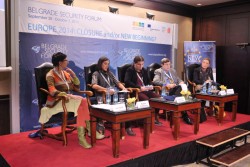 Ms. Lea David pointed out that state project of memory building in Serbia is a great example of how a post conflict state is dealing with opposing demands, external and local. She discussed in detail three major mechanisms employed by the Serbian state in this process: de-contextualization of memories, developing victimization narrative, and comparing Serbian experience with the holocaust. Serbian political elites used these mechanisms to silence the debate in the society and public reminiscence.

Ms. Kalina Yordanova shared with the audience the findings of her field work in Bosnia in 2012. Through the analysis of the children’s drawings, she researched how children imagine war on the basis of their parents’ transmitted experiences, and how they build their identities on the basis of these transmitted experiences. Yordanova pointed to various metaphors revealed by the drawings and symbolizing dehumanizing nature of war, death, fragmentation caused by war, etc.

Mrs. Aleksandar Sazdovski discussed the new Macedonian nation building project, based on the mythology of Ancient Macedonia. The nation building project is developed in relation to external and internal perceived security threats, i.e. recognition of the state and Macedonian identity and disputes between ethnic Macedonians and Albanians. He argued that the Ancient Macedonia was chosen as a role-model because it disputes the claims by neighboring states – Serbia, Bulgaria, Albania, and Greece – by establishing Macedonians as pre-Slavic and indigenous population on the territory they live.