The first day of the Belgrade Security Forum will be remembered by the Transatlantic Trends Report 2014 which was presented and explained by Ms. Constanze Stelzenmüller, Senior Transatlantic Fellow GMF, and later discussed with Ambassadors Mr. Michael Kirby, US Ambassador to Republic of Serbia, Mr. Michael Davenport, Head of the European Delegation in Serbia, Mr. Giuzeppe Manzo, Ambassador of the Republic of Italy in Serbia, and Mr. Goran Svilanović, Secretary General of the Regional Cooperation Council. 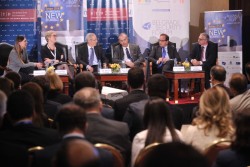 Transatlantic Trends is an annual survey of U.S. and European public opinion published by the German Marshall Fund of the United States (GMF) and the Compagnia di San Paolo, with additional support from the Barrow Cadbury Trust, the BBVA Foundation, and the Swedish Ministry for Foreign Affairs. It combines long-term trend questions about the state of transatlantic relations with questions about current political issues. In 2014, ten European Union member states were surveyed: France, Germany, Greece, Italy, the Netherlands, Poland, Portugal, Spain, Sweden, and the United Kingdom, as well as the United States, Russia, and Turkey. Survey results are often used to guide policy makers, nongovernmental organizations and media.

The 13th issue of the Transatlantic Trends Report found that Americans and Europeans disagree about what should be the future of USA and EU relationship, while Europeans think that EU should be more independent, the USA citizens are seeking a closer cooperation. Another important finding is that majority in the USA and EU are willing to offer Ukraine EU and NATO membership. Entire survey and its important and remarkable findings can be found here.

After report presentation, each ambassador had the opportunity to comment on the findings. The general conclusion was that Serbia has made great moves and certain steps towards European Union accession, which will soon deliver visible results and benefits to Serbian citizens and the whole region as well.

H.E. Michael Kirby stated that it is very important that European citizens see benefits of EU membership and that this could be great motivation for Serbia and other candidate countries to seek to join this community. Ambassador Kirby underlined that he can see changes that were made and that human rights in Serbia are now on much higher level than the case was earlier. He also stressed out that Serbia’s negotiation with Kosovo and EU now makes Serbia important regional leader and peace keeper.

The Head of the EU Delegation to Serbia, H.E. Michael Davenport also assesed that it is much easier to see Serbia as a future partner. The fact that the majority of people in European Union have positive attitude towards EU enlargement is a great signal that Serbia should continue down its chosen path.

H.E. Giuseppe Manzo pointed out that Italian presidency of the Council of the EU put on agenda issues such as unemployment, immigrations, economy crisis effects and EU enlargement of importance to citizens. The fact that European citizens believe that Europe has been successful in overcoming obstacles, and that these new problems can also be solved within the EU, should be seen as a possible benefit for Serbia as well.

Mr. Goran Svilanović stated that the Regional Cooperation Council’s mission is to support each country on its path of EU integration, despite the existing problems, such as corruption and economic crisis effects that should be solved. The greatest problem is raising poverty rates and unemployment which leaves room for radical ideas and moves. On the other hand, the grim economic situation forces governments to open up to foreign capital preconditioned by the rule of law.