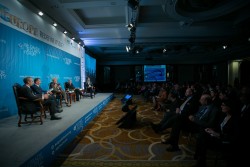 Plenary Panel Improving the European Model of Governance: Ways forward was an exceptional platform to discuss current pressing issues and challenges that Europe is facing at the moment. The main focus was on the ongoing refugee crises directly linked to the future of European democracy and human rights as one of the founding principles of the European Union.

H.E. Michael Davenport opened the discussion by emphasizing that all the challenges that EU is facing were shaping the way it evolves, since it was yet to reach its settle state. Furthermore, the differences across the member states affect the uniform picture of the union as a whole, therefore we must all work together on improving the image, strive towards humbleness, while still being ambitious.

Gesine Schwan shed a light on a problem that Europe as a whole is facing. Namely, younger generations of politicians are primarily focusing on economy and not democracy, which by no means contributed to the solidarity we were looking for. This further led only to shortsightedness and no strategic vision.

Franco Frattini insisted on the idea that there was one more political goal to be achieved as soon as possible. More precisely, Europe needs to close the gap between the citizens and institutions, which would contribute to trust building in our societies. In order to improve this particular connection, Mr. Frattini offered numerous solutions. Those include proposal, such as using majority vote not as exception, but as normality and increasing the use of referendums so that we can bind citizens to the political union. Mr. Frattini further appealed to member states to loosen their national egos in facing the refugee crisis.

Latvian experience of a challenging transition and getting out of the long dark period of occupation was presented by Zaneta Ozolina. The democratic progress is deeply rooted in Latvian caused by cherishing independence not as something that is granted like it is the case in other European countries, discussed Ozolina, and added that Latvia does not have any political parties that are building credit on euroscepticism.

Finally, the conclusion that clearly stood out was that Europe cannot achieve anything if divided. It has to send out the image of unanimity to the rest of the world, so that it could be a strong partner to other major players in the world.