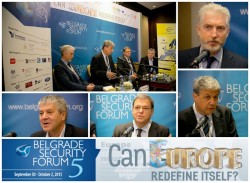 The Session of the final day of the Belgrade Security Forum titled New Ways of Energy Exploitation: Changing the Habitat for Good or Bad gave answers on some questions regarding global energy picture and its evident significant transformation on global scale.

Future Energy Union is a reality for all Western Balkans states and the region can reach new energy generation. Balkan must be energy center of Europe which should help try to move things in right direction.

One of the topics was also the perspective of European Energy Policy. Energy Union isn’t going to stop on the EU border and current non-member states would be part of it. EU has very specific and clear targets and strategies – Europe 2020 and 2030. Energy community is a part of acquis legal international body which has power to impact on future of energy in Europe. States need to be more.

As the audience was particularly interested in the issue of current refuges crisis, it has been emphasized that decentralization is the contributive factor to wealth on micro level in conflict and post conflict states. Ukraine’s geopolitical position is the one of the best examples, as roots of most wars lay in the lack of supply of oil and/or gas.

Panelists stressed the huge difference between gas and non-gas states, which was automatically causing different start points of each state according to Energy Efficiency Policy.