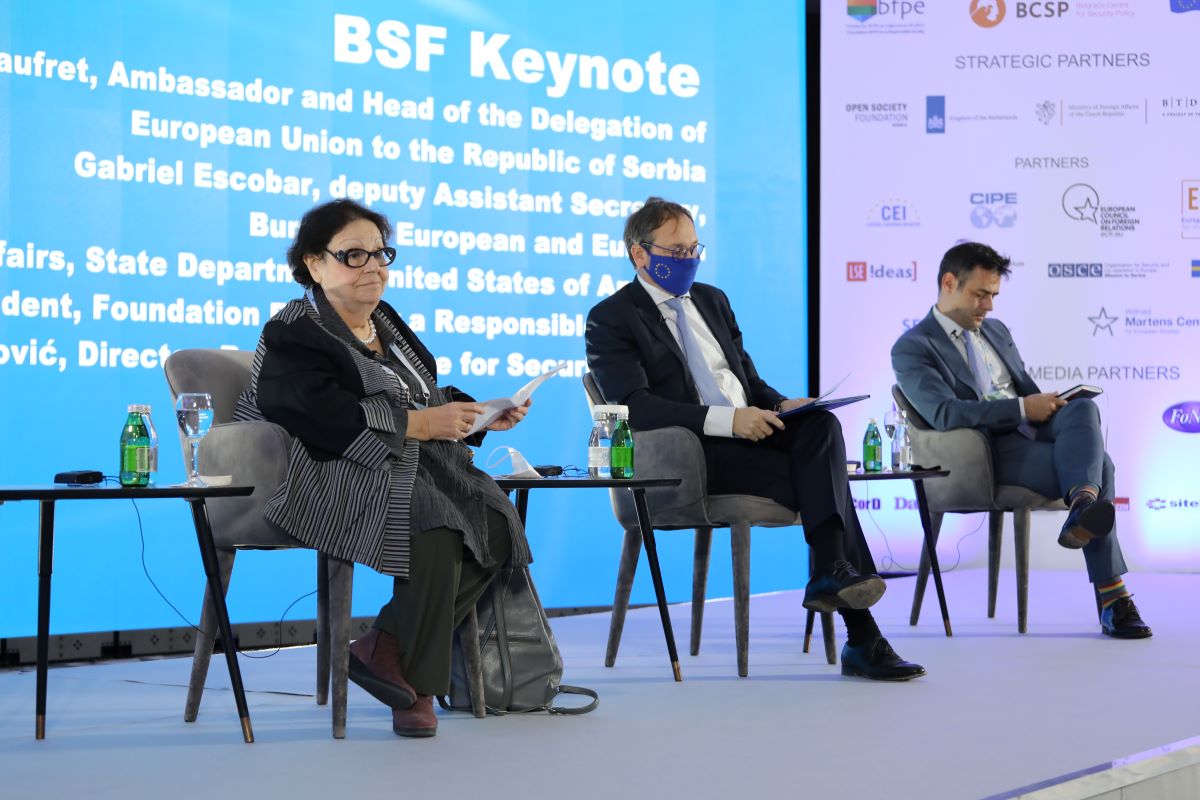 Future of the Western Balkans is in the EU with the US as a partner, is the main message from BSF Keynote Address.

Ms. Sonja Licht the President of the Foundation BFPE for a Responsible Society emphasized the Belgrade Security Forum managed to create a unique venue of dialogue through last 11 years, which is a rare occurrence in a society where common good is not a priority. She pointed out that we are witnesses of the biggest global health catastrophe, and reminded us that we are all in the same boat – we will all sink or survive. The question is whether we can act as global community. In order to survive, many issues require solidarity, and these are not times for business as usual, it’s time for big decisions. Global poverty and climate change are the issues of extreme importance. Ms. Licht added that Belgrade Security Forum tends to bring the region together in service common good and combating anti-democratic forces.

Ambassador and Head of the Delegation of European Union to the Republic of Serbia, H. E. Emanuele Giaufret, stated that EU values are the compass for navigating the future, particularly in times like these, when there are permanent battles of narratives and erosion of democratic principles. During which EU is protecting human rights inside and outside Europe. His excellency also pointed out that inclusivity and solidarity can overcome inequality. Talking about covid-19, he said that pandemic should be addressed globally, which is why the EU has exported as many vaccines as they have distributed to their own citizens. He pointed out that climate change is another huge threat which has to be addressed globally. EU cannot do it alone.

“We need coalitions, mobilization of others to act, we need everyone abroad, including the Western Balkans”, said Emanuele Giaufret.

The EU and the Western Balkans share history, values and destiny, as Giaufret said. However, there is still much work to be done, in areas such as freedom of media or rule of law, and the Western Balkans have to involve themselves in the issues of common future. In that regard, civil societies’ role is important in overcoming the remaining obstacles on the EU path.

Mr. Igor Bandovic, the Director of the Belgrade Centre for Security Policy, highlighted the need to defend human dignity at all costs.

“In a time of crisis, we have to be honest with each other, we have to talk with real words. Otherwise, we risk hypocrisy”, said Igor Bandovic.

He added that covid-19 crisis has shown how fragile humanity, so the role of civil society is to defend individual rights and human dignity.

Deputy Assistant Secretary of the Bureau of European and Eurasian Affairs at the State Department of the United States of America, Mr. Gabriel Escobar pointed out that the new US administration is looking to resolve currently unresolved issues in the Balkans. He stated that US wants to see all six Western Balkans countries as a part of the European Union. EU is the sphere of opportunity, freedom and rights, and every member state has become more democratic and successful by joining the EU. He added that the US administration sees the Western Balkans through the prism of 21st century, not through the wars in the 90s. However, he finds it very disappointing that local politicians haven’t much evolved in their thinking from the 90s. According to Mr. Escobar, the Western Balkans has great potential for economic growth, for example, Serbia’s economy has grown seven times since 2000. Gabriel Escobar finished his remarks by saying that this US administration will help the people who see the future of the region in the EU and the USA as the partner.