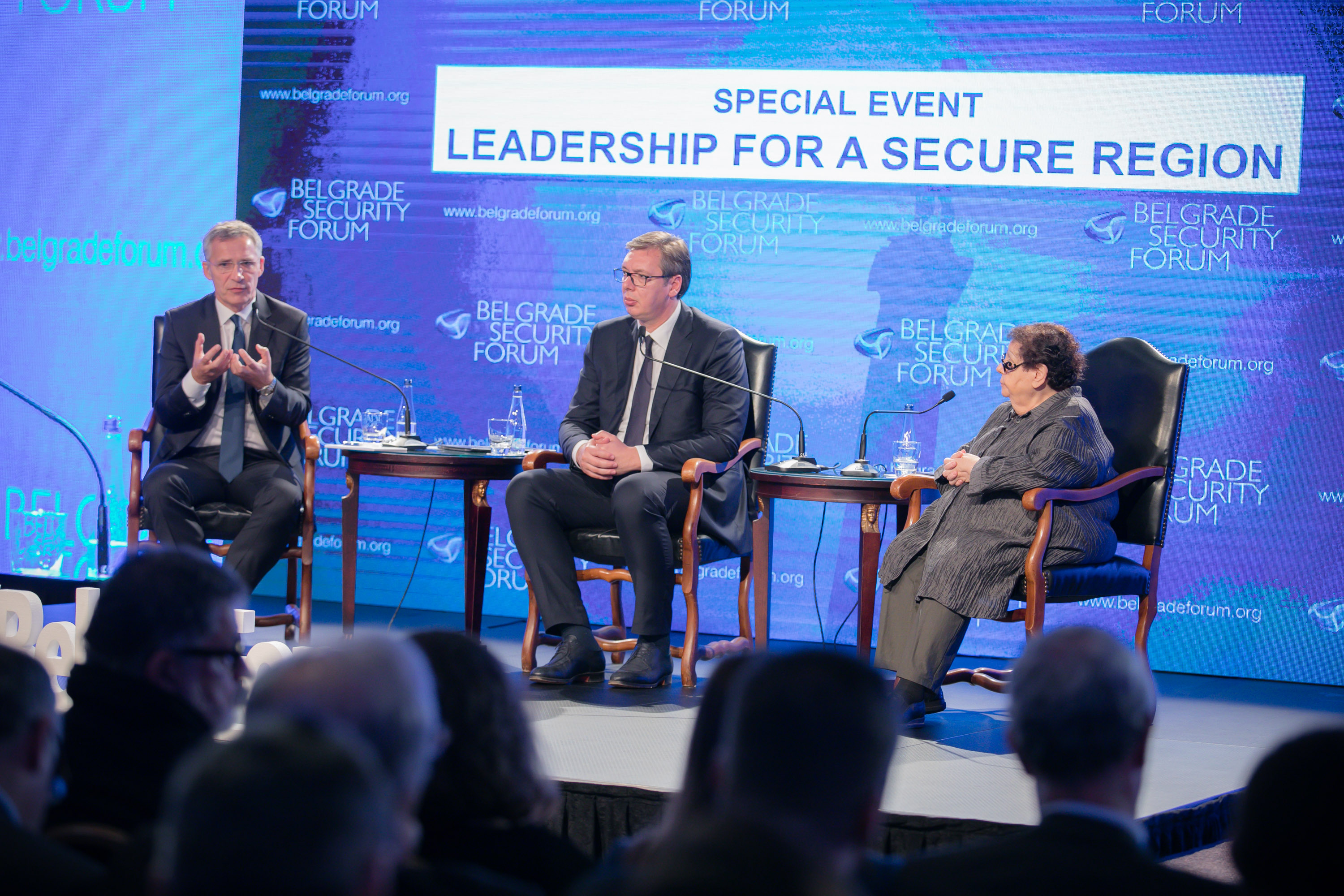 The cooperation between Serbia and NATO in maintaining peace and tranquility as the foundational elements of progress is ever more successful and benefits overall economic progress which is an essential need for the citizens through the region, conclusion was of the Belgrade Security Forum Special Event titled “Leadership for a Secure Region”, held on October 8, 2018, in Hyatt Regency Belgrade.

The event saw an open conversation between President of the Republic of Serbia Aleksandar Vučić and the NATO Secretary General Jens Stoltenberg, moderated by the BSF Steering Committee Member Sonja Licht of the Belgrade Fund for Political Excellence.

The chief driver of the discussion was the BSF’s continued desire to empower dialogue between relevant and influential actors as a means of strengthening their cooperation and communal progress.

As both Vučić and Stoltenberg came to the event straight from a joint civilian readiness exercise in Mladenovac, they reflected on how this is a typical example of Serbian-NATO relations being able to contribute practically to saving lives, placing effective action over rhetoric.

President Vučić said that the NATO has become a central hub of drawing together regional partners that must work together, for matters of security but also for wider societal needs. Vučić also made a call for the region to renege the constant reminders of past conflicts.

“We know what has been done and what we have done to others, but we must overcome this”, Vučić added.

Answering on a question how complex modern security issues, like global warming and the development of artificial intelligence, fit into contemplated the NATO responses, SG Stoltenberg noted that the future is difficult to predict and that the NATO now primarily focuses on providing a rapid response to whatever crisis might occur. This is chiefly through raising staff awareness, empowering intelligence services, raising standards in the cyber world, and developing approaches to hybrid threats.

“It is difficult to pin down when modern conflicts even begin and where they are actually fought and the line between war and peace, conflict and non-conflict is difficult to draw”, Stoltenberg noted.

President Vučić strongly agreed with these comments but added that Serbia’s size and lack of influence limit its potential in remedying global problems and lambasted the perceived chaos of the international system as it lacks leadership, has no acknowledged hierarchy and is driven by national self-interest.

In answering on question on how he regards regional challenges today, SG Stoltenberg emphasized that the region has considerably improved but was faced with renewed pressures, such as inflammatory nationalist rhetoric that pose a risk to the progress achieved. He echoed President Vučić’s emphasis on deepening economic cooperation towards higher levels of trust.

President Vučić voiced his concerns over the continued troubles in Kosovo and the perceived unfair pressure towards him and Serbia from Albanian, Bosnian and Croatian neighbors while also praising the NATO as often the primary ally in dealing with these pressures.

SG Stoltenberg reminded that the NATO cannot fix the issues of the region, but can assist in countries doing it themselves, and again stated that NATO will not pressure Serbia towards accession.

The discussion continued with the questions from the audience, with Ms. Jelena Milić of the CEAS posed a multifaceted question primarily focusing on raising concerns over the NATO opponents advancing rhetoric against the alliance and calling for NATO to host debates about its benefits here that Stoltenberg reservedly acknowledged.

Ms. Sonja Stojanović Gajić of the BSF Steering Committee, Director of the Belgrade Center for Security Policy asked if efforts to protect democratic control over the tools for security against hybrid threats remain a NATO priority, receiving an emphatic note of agreement from SG Stoltenberg.

The eight edition of the Belgrade Security Forum, under the title “Finding Answers Together to the New Normal” will be held from 17 to 19 October, also in Hyatt. Traditionally, the BSF opens with an Academic Event that gathers young and promising researchers, and this year they will discuss on how conflict sensitive is EU crisis response, followed by evening Plenary Panel on the EU enlargement prospects of the Western Balkans in 2025. Central themes of the three-day gathering will be the development of relations within the European Union, the growing importance of Asia and the changes brought by the fourth industrial – digital – revolution. Also discussed will be the new phase of the dialogue between Belgrade and Pristina; international community, domestic actors and reforms in Bosnia and Herzegovina; the impact of Germany and the United States’ policies; the role of women in security; prospects for justice and reconciliation; as well as relations between the West and Russia, turmoil in the Middle East, the impact of high-level corruption on international security, defense against propaganda and misinformation, and cyber security.

Launched in 2011 and ever since hosted by three civil society organizations, the Belgrade Security Forum has since served as a meeting point and place for dialogue. Today, “from Istanbul to Vienna”, BSF represents one of the most prestigious events of its kind, bringing together more than 100 speakers and close to 700 participants: decision and policy makers, representatives of security institutions, civil society, international and academic community from Serbia, the wider region, Europe and the world.