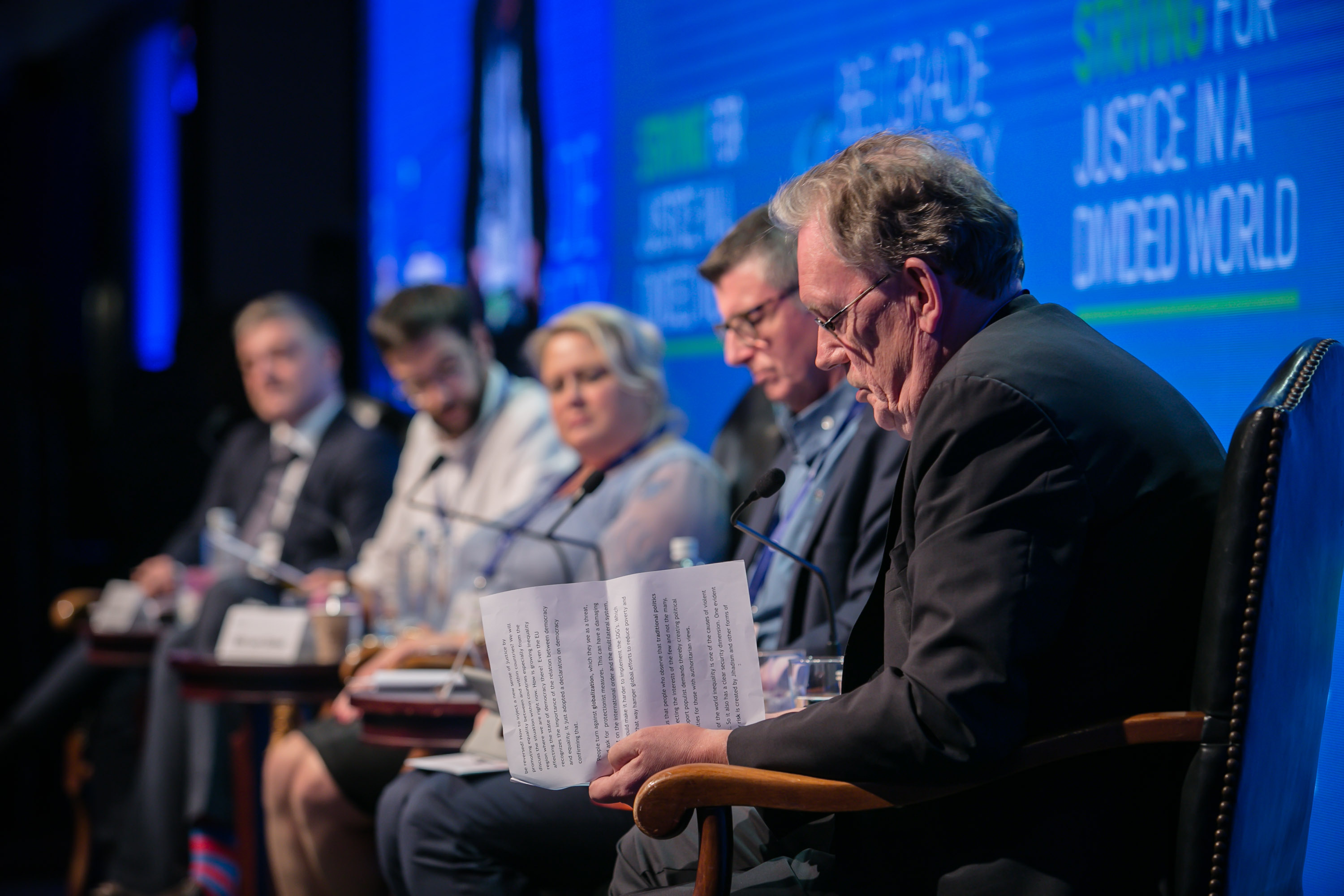 The number of billionaires has nearly doubled, while almost half of the world’s population is just above extreme poverty, living on less than $5.50 a day (Oxfam). This prompted Jan Marinus Wiersma, Senior Visiting Fellow, Netherlands Institute of International Relations Clingendael, to raise the issue of growing inequalities and ask the panelists if there was a way of restoring the trust in judiciary. In the struggle for a more just world, how to defeat not only the status quo but also the growing right-wing populism?

Tobias Flessenkemper, Head of Office, Council of Europe Office in Belgrade stressed that combining individual rights and the concept of genuine democracy is the essential European effort. He raised the issues of sexual orientation, gender identity, and other controversial cases. He saw positive elements to democracy which are organizing communities and local participations.

“Intergovernmental mechanism is a crucial part of the successful implementation of human rights conventions. It is not enough to let states act on their own. We need a functional international system”, he noted.

Dr. Bibi van Ginkel, Owner and Founder of The Glocal Connection – Platform for Shared Security, pointed out that it is all about making connections between different layers of society. There has been a trend in both USA and Europe of securitization of many areas of social life; there is also the trend of broadening the concept of national security.

“We need to invest in something like ‘small justices’”, Ginkel stated and continued “This means that we have to focus on microlevel to achieve full equality in our daily lives”.

She also stressed that more power granted to the executive branch, means also increasing the oversight mechanism. Opening up the doors and inviting people to the table – two indispensable steps in fighting on the ground for human rights and justice.

Danilo Ćurčić, Programme Coordinator, A11* Initiative for Economic and Social Rights pointed out that fight against poverty needs to be the obligation of the Government. Serbia got 9.5 million euros from the EU for houses for Roma people and at the same time is spending a lot more of budget funds on affordable housing for security services members. This shows the attitude of the government toward vulnerable groups.

“If we understand justice as a right of every individual to enjoy individual rights and equal treatment, then we can ask ourselves why poverty is our reality”, Ćurčić noted.

Social rights are part of human rights and lack of funds is not an excuse for not respecting them, he was determined.

Barry Snelgrove, Member of the Advisory Board, Agencia, UK emphasized political mess that exists today is the result of the environment where the lie is often truth and vice versa. Trust in justice and rule of law to rely on them to do the right thing need to be restored.

“We can’t find equality without functional judiciary and the rule of law”, Snelgrove stressed.