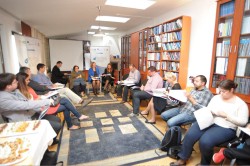 The organizers of the Belgrade Security Forum hosted representatives of domestic media in order to present the upcoming Forum at the premises of Belgrade Centre for Security Policy on September 13th.

Main topics and key speakers were presented by Sonja Stojanovic Gajic, Director of the Belgrade Centre for Security Policy, Sonja Licht, President of the Belgrade Fund for Political Excellence and Maja Bobic, Secretary General of the European Movement in Serbia

This significant international event will gather hundreds of foreign and domestic high officials and experts dealing with Security and Foreign Policy issues.

Three Serbian civil society organizations Belgrade Fund for Political Excellence, Belgrade Centre for Security Policy and European Movement in Serbia launched the first Belgrade Security Forum in 2011 in order to position Balkan region and Belgrade at the map of world high-level events where strategic issues are being discussed.

Strategic partners of the Belgrade Security Forum are: OSCE Chairmanship Task Force of the Swiss Federal Department of Foreign Affairs, Geneva Centre for the Democratic Control of Armed Forces (DCAF), The Research Council of Norway, Balkan Trust for Democracy and Slovak Atlantic Commission.

BSF is being realized with the support of: Robert Bosch Foundation, Norwegian Embassy, United States of America Embassy, Slovak Aid, Ministry for Foreign Affairs Sweden, NATO PDD, International Visegrad Fund, European Fund for the Balkans and Federal Ministry for Defence and Sports of the Republic of Austria.
Partners are: Jagello 2000, International Centre for Democratic Tranistion, Council for Inclusive Governance and Embassy of the Slovak Republic in Belgrade

The Official car of the Forum is FIAT