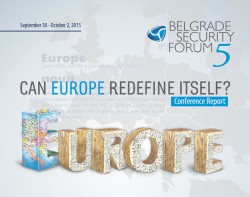 The overall topic of BSF 2015 was “Can Europe Redefine Itself?”. Developments since 2014 have led to the same global interconnectedness that once had us observe globalization with awe now being used to perpetuate conflict. In less than a year we have witnessed the end of the post-Cold War order, with no real substitute in sight. Most, if not all of the dilemmas that were posed prior to the global financial crisis remain unanswered. In such circumstances, the EU has yet to “punch its weight” in global affairs.

BSF 2015 brought together prominent officials from national, foreign and international institutions, independent experts and academics, civil society representatives and journalists to discuss topics related to security and foreign policy, including: EU foreign policy on the post-Soviet space and the Balkans, the future of the OSCE, the Ukraine crisis, countering radicalization and terrorism, the Berlin Process, the Belgrade-Prishtina dialogue, corporate and energy security, inequality as a source of insecurity and many others. However, in light of current events, the topic that marked the whole of BSF 2015 was the refugee crisis and the European response to it. The organizers of the BSF therefore issue an appeal calling on the EU to develop effective institutions and adopt rules for dealing with future waves of immigration.

BSF 2015 gathered over one hundred discussants, 13 young scholars and 600 domestic and foreign senior officials from European countries and the wider world, as well as representatives of the European Union, NATO, the OSCE, the German Marshall Fund, renowned scientific and research institutes, parliamentarians, civil society and journalists.

The forum received extensive media coverage, including more than 800 news feeds reported by 100 journalists and reporters from over 80 local, national, regional and international media outlets. The organisers of the forum are especially thankful to our official media partner, which contributed greatly to the forum’s media visibility.

Belgrade Security Forum 2015 Conference Report is now available and you can download it here.