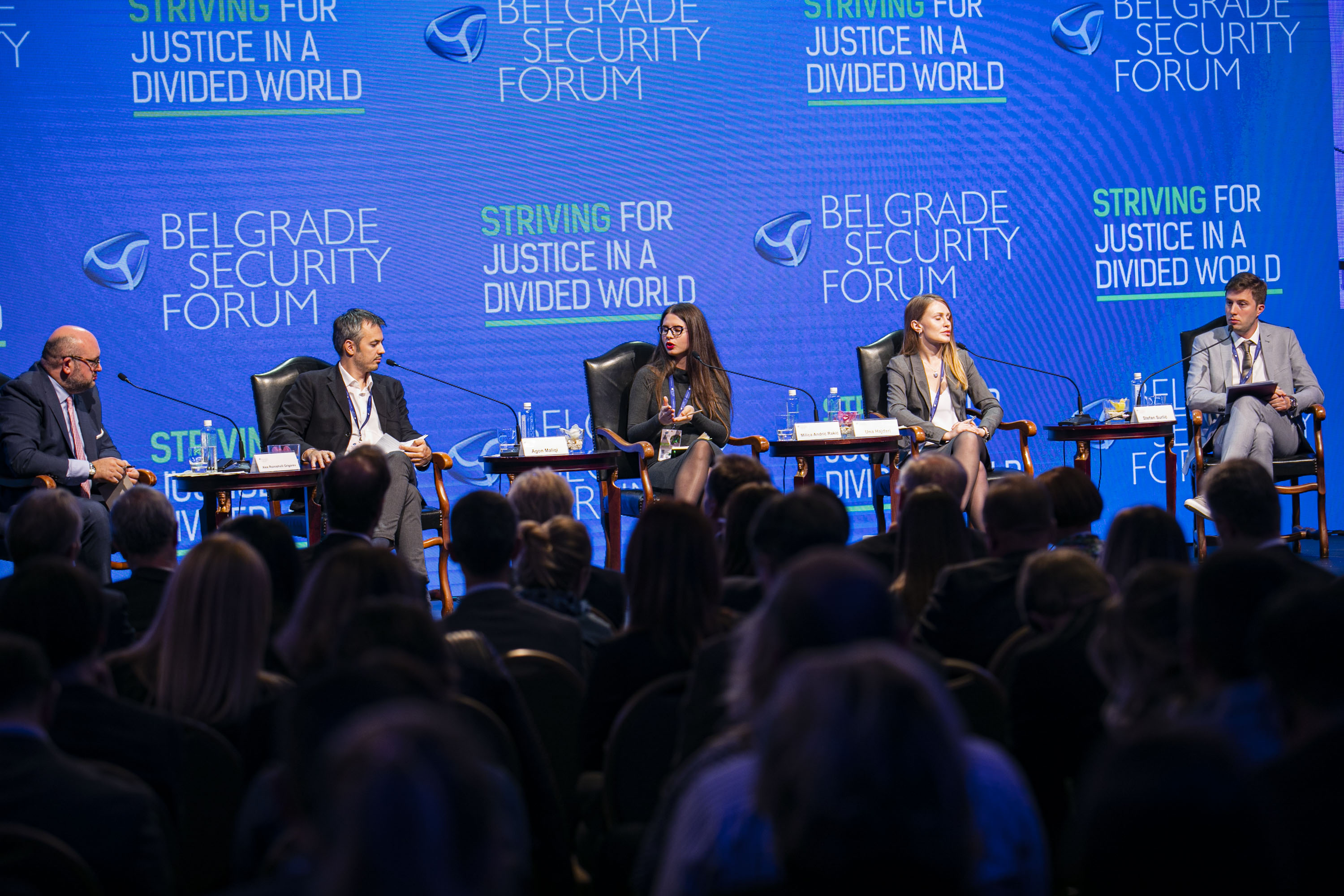 The last plenary panel of this year’s Belgrade Security Forum was chaired by Alex Roinishvili Grigorev, President of the New York-based Council for Inclusive Governance (CIG) and Adjunct Professor in International Peace and Conflict Resolution at Arcadia University in Pennsylvania. He began by pointing out the general lack of understanding and communication in the current world, and especially online and went on to present the speakers as experts uninhibited to engage in an open, honest and constructive debate, that come from the affected area – Kosovo.

Agon Maliqi, policy analyst, civil society activist and media writer from Pristina, put little hope in Kurti-Vučić meeting even happening. He elaborated that there were no true drivers, as the EU lost credibility and the US is sending mixed messages. Furthermore, he stated that Kurti used populist tones in the past, but that he might understand the weight of the situation from now on and might yet surprise us.

Milica Andrić Rakić, journalist with the KoSSev online portal, North Mitrovica and a correspondent for Deutsche Welle, pointed out similarities between the political situation in Serbia in 2012 and Kosovo now. She emphasized underlaying autocratic tone of Kurti’s rhetoric and warned that he was too inexperienced and alienating the Serbian community in Kosovo.

Una Hajdari, on the other hand, spoke of the Kurti’s idea of “radical honesty” he plans to implement into the dialog itself. She points out that Vučić might not be comfortable with this, as in the past the two leaders in dialogue would usually send different messages to their public. If it is implemented, she says, it will change the EU approach.

Hajdari then talked of the lack of “the EU carrot” that she observes as a lack of the accession perspective for the candidate countries of the Western Balkans, meaning that there is not much reason for debates what-so-ever.

Stefan Surlić gave an idealist perspective, offering an alternative. He says that meeting, when it occurs, will actually “open a new stage in Pristina-Belgrade Dialogue”. He claims it will lead to reconciliation.

Surlić also took a chance to point out the hypocrisy of public perception – “Serbian flags on Kosovo are treason, Albanian flags are nationalism. Even though both are foreign flags.”