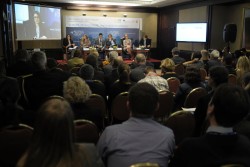 Dr. Alexandra Innes began the round with a paper presentation discussing influence of collective memories and how those could be transferred to present generations not be involved in original events. Subject of her study was the Greek-Cypriot community in the United Kingdom and identity it practices. The paper shows how memories of a trauma, such as the conflict of 1974, can have tremendous influence on everyday lives of Greek Cypriots in the UK and how their identity changes due to altered historical circumstances. Moreover, she analyzed how reproduction of such memories contributes to intractable conflicts, this being the case with the Cyprus conflict.

Dr. Jelena Subotić, examined the role of narratives in social construction. More precisely, Dr. Subotić examined circulatory power of narratives using examples from conflicts occurring in former Yugoslavia, in particular use of the genocide narrative. It was shown that accepted narratives can influence policy, and limit options for decision makers. Purpose of such analysis is to enrich understanding of power. In fact, narratives are a form of power that constructs discursive social order, as Dr. Subotic examined. Urban Jakša, analyzed temporal aspects of identity construction in security communities. He concluded with analysis of methods used by sides in current Ukraine conflict and Islamic State. Apparently, methods, chosen actions, and even organization are influenced by different temporal narratives. Therefore, these narratives are not exclusively contemporary.

Afterwards, Dr. Hans Mouritzen presented his findings on the contemporary (mis)use of historical analogies. He found that invoking historical events is a poor method in creating and explaining foreign policy. In fact, if politicians rely on such action, the policy is most likely going to fail for a few reasons. First of all, these analogies are often not sufficiently similar. Thus, they lead in wrong direction. Moreover, having obsession with a single event leads to a failure. It seems that using historical events is a sign of something controversial going on and it usually happens in the lack of proper arguments to legitimize an action.

The discussant, Ajsa Zarakol, mentioned how American education on International Relations almost completely ignores historical narratives and value of memories. Consequently, in foreign policy making there are a very few historical references. She added how her internal negotiation whether to use a Turkish or American passport at the Serbian border guard best exemplifies the role of historical narratives and their importance.