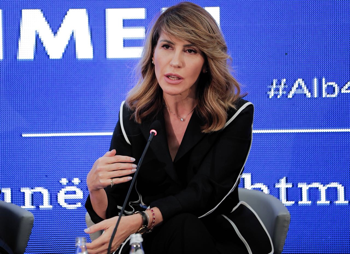 Majlinda Bregu, is an accomplished Albanian Politician, a strong EU believer, and a promoter of women’s rights and empowerment. She also has a prominent career as university professor and journalist.

Mrs. Bregu was elected as a Member of Parliament for three consecutive legislatures, (2005-2017) as a Democratic Party member, Centre Right. From March 2007 to September 2013, she served as Minister of European Integration and the Government Spoke-person. Both duties, which she passionately accomplished, allowed her to domestically steer the increasing challenges of European Integration membership, and promote abroad the importance of the membership perspective for the stability of the region.

During the years of opposition, 2013 – 2017, Mrs. Bregu continued to push the country’s advancement towards EU membership. In this period she chaired the European Integration Committee at Albanian Parliament and the National Council for European Integration. In her parliamentary career she was consistently working for an all-inclusive approach and far-reaching consensus on the European perspective of Albania and the region.  Additionally, she has actively supported and contributed to the civil society forum established under Berlin process.

As from April 2018, Mrs. Bregu is appointed as the Secretary General of the Regional Cooperation Council, the operational arm of the South-East Europe Cooperation Process, which mission is to sustain focused regional cooperation in South Eastern Europe through a regionally owned and led framework that also supports European and Euro-Atlantic integration.

Mrs. Majlinda Bregu graduated from the Faculty of Social Sciences, University of Tirana. She holds a Master’s degree in Social and Political Science, and a PhD in Sociology of cultural phenomena and normative process”, from the University of Urbino, Italy.

She is born in Tirana on 19.05.1974. Mother of two and married to Namik Ajazi a film producer. Fluent in English, Italian, Spanish.