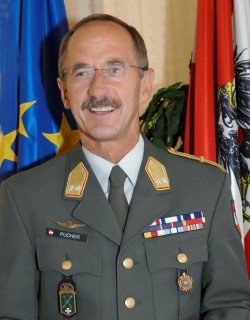 Major General Johann Pucher has been Director of the General Directorate for Security Policy at the Austrian Federal Ministry of Defense and Sports since March 2007. He is now retired but is still active in an advisory role with various security and political institutions in Austria. Among the positions Pucher has held during more than 40 years with the military are Coordinator for Western Balkan issues at the Ministry of Defence, member of the Board of Directors of the International Military Sports Council (CISM), Director of the Regional Arms Control Verification Assistance Center (RACVIAC) in Zagreb, Croatia, and Military Advisor at the Prime Minister’s Office of the Federal Chancellery.

All session by Johann Pucher