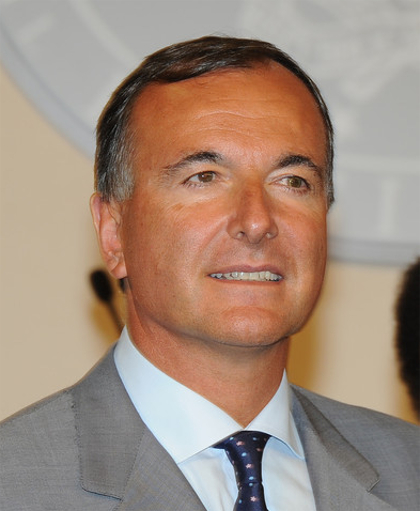 Franco Frattini is an Italian Magistrate. He was appointed State Prosecutor on 1981 and in 1986 was appointed by public competition as administrative magistrate. Today he is Justice and Chamber President to the Italian Supreme Administrative Court (Conseil d’Etat). He served twice as Former Italian Foreign Minister (2002-2004 and 2008-2011), and as Vice- President of the European Commission and Commissioner for Justice, Freedom and Security (2004-2008). Previously, he has served as Secretary-General of the Prime Minister’s Office (1994), President of the Parliamentary Committee for Intelligence and Security Services and State Secrets (1996), Minister for Civil Service and for the Coordination of Information and Security Services (2001-2002), and as a member of the Prime Minister Commission for the Constitutional reforms (2013 – 2014). From 2011 to 2013 Mr. Frattini was President of the De Gasperi Foundation. Today he is President of the Italian Society for International Organization (SIOI), an international non-profit organization, working under the supervision of the Ministry of Foreign Affairs. He is also Special Advisor to the Serbian Government for the EU integration process, and President of the High Court of Sport Justice (CONI). He was appointed “Knight Grand Cross of the Order of Merit of the Italian Republic”, and “Commander of the Legion of Honour” by the President of France. In 2011 Frattini received the golden neck-chain of the Olympic Order, the highest honour of the International Olympic Committee (IOC). The award was recognition of his personal commitment and of Italy’s efforts to have the IOC awarded observer status at the United Nations. Mr. Frattini is also decorated with the “Order of Friendship”, a state decoration of the Russian Federation.

All session by Franco Frattini