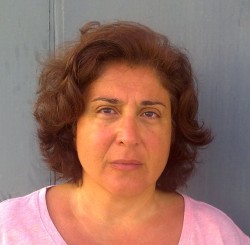 Despina Syrri is President of Symβiosis and serves on the Thessaloniki Municipality Migrants’ Integration Council in Greece. She is currently involved in research on irregular migrants, detention centres at the Greek-Turkish border, the treatment of third country nations at Europe’s external borders with ELIAMEP and the EU Fundamental Rights Agency, and participates in developing a European MA program on Humanitarian Action for the EC. She has been a Visiting Fellow at the Amsterdam Centre for Holocaust and Genocide Studies, Director of Research and International Cooperation at the Immigration Policy Institute in Greece, and has taught Political Science and Political Anthropology at the American College of Thessaloniki. Other posts include stints with the Reuters News Agency, Athens News Agency, the South East Europe Research Centre, the Berlin Migration Netzwerk, the British Council, the Oxford Refugee Studies Centre, the EastWest Institute, as well as IOs and NGOs in Southern Africa, East Europe and South East Europe on issues of post-conflict development, elections, migration, refugees, borders and the Western Balkans integration to the European Union.

All session by Despina Syrri

Session 1: Between Mobilisation and Isolation: EU and Migration Trends