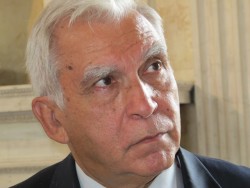 Professor Adam Daniel Rotfeld is a former Minister of Foreign Affairs of Poland. He was Co-Chairman of the Polish-Russian Group on Difficult Matters and Commissioner of the Euro-Atlantic Security Initiative Commission. From 1990 to 2002 he was director of the Stockholm International Peace Research Institute (SIPRI), and a member of the UN SG’s Advisory Board on Disarmament Matters from 2006 to 2011 (he chaired the ABDM in 2008) and the NATO Group of Experts (the Wisemen Group) on the new Strategic Concept of Alliance (2009-2010). He deals with the theory and practice of international security and human rights, conflict solution, arms control and disarmament. He has published more than 20 monographs and about 450 articles and studies and serves on several national and international boards, committees and scientific councils and is a professor at Warsaw University.

All session by Adam Rotfeld