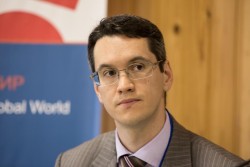 Timur Makhmutov graduated from MGIMO University, School of Political Science. He started his carrier as a lecturer in the Political Theory Department of MGIMO. For four years he has held courses on political management, published several articles and two books on political processes in Russia and their socio-economic impact on international cooperation with special attention to the processes of marginalization. He specializes mainly on the countries of the Middle East and post-soviet states. Since 2011 he has worked with the Russian International Affairs Council (RIAC) as Deputy Program Director. He is a member of the RIAC Editors Group for reports and working papers. Within his activity for RIAC his sphere of interest centers on public diplomacy and the role that academic circles and universities might play in this form of international interaction.

All session by Timur Makhmutov