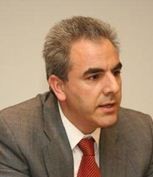 Thanos P. Dokos received his Ph.D. in International Relations from Cambridge University and has held research posts at the Hessische Stiftung Friedens und Konfliktforschung (1989-90), in Frankfurt, the Center for Science and International Affairs (CSIA) at Harvard University (1990-91) and the Hellenic Foundation for European & Foreign Policy (ELIAMEP) (1994-1995). He served as the Director for Research, Strategic Studies Division, Hellenic Ministry of National Defence (1996-98) and as an Advisor on NATO issues to the Ministry of Foreign Affairs (1998-1999). He was a NATO research fellow for 1996-98. From August 1999 until August 2006 he was the Director of Studies at ELIAMEP. He is currently the Director-General of the Foundation. He is a visiting lecturer at the University of Athens (Department of Turkish and Modern Asia Studies) and a Lecturer at the Hellenic National Defense College and the Hellenic National Security School. His research interests and publications include international security, Greek-Turkish relations and Turkish security policy, arms control, and Mediterranean security. His recent publications include: ThanosDokos (ed.), Security Sector Reform in South-eastern Europe and the Middle East, Kluwer Academic Publishers, 2007; “The Proliferation of Weapons of Mass Destruction in the Mediterranean and the Middle East. Options for NATO and the EU”, Taylor & Francis, 2007; The Iranian Nuclear Issue: Addressing the Problem, Proposing Solutions, ELIAMEP Thesis, 2008.

All session by Thanos Dokos