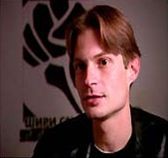 Srđa Popović is one of the leaders of the Serbian OTPOR! (English: Resistance), Movement, who was elected after Milosevic’s overthrow to the Serbian Parliament. When Popović founded OTPOR! in 1998 at the age of 25, he had already been a veteran of Serbia’s student movement against the Milošević regime. In Parliament, he served as a deputy in the Democratic Party of the new Serbian prime minister and leading democratic reformer Zoran Djindjić. He was Special Adviser to Djindjić until the latter’s assassination in 2003. In 2004, Popović left politics to found the Center for Applied Nonviolent Action and Strategies (CANVAS) in Belgrade, an organization that has trained activists in dozens of countries around the world – from those involved in the successful pro-democracy movements in Georgia, Ukraine and the Maldives to the ongoing struggles in Burma and Iran.

All session by Srđa Popović

Session 2: Upheaval in the Arab World and its Aftermath