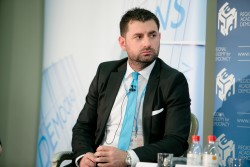 Sokol Bega holds the post of Deputy Head of the Reporting and Political Analysis Unit in the OSCE Special Monitoring Mission to Ukraine. He has been working since spring 2014 with the Mission, which was established in March 2014 with the aim to contribute to reducing tensions and fostering peace, stability and security, and to gather information and report on the security situation and to support the implementation of OSCE principles and commitments. Before his assignment in Ukraine, Mr. Bega worked in the Political and Public Affairs Unit of the OSCE Presence in Albania, where he spent seven years working closely with domestic political actors and the international community to strengthen democracy, rule of law and security. Before that he worked for the United States Department of Justice’s International Criminal Investigative Training Assistance Programme in Tirana. Mr. Bega is a graduate of the Faculty of Foreign Languages of the University of Tirana, majoring in British and American Studies. Mr. Bega has advanced his studies also in political and regional studies, through the Council of Europe’s School of Political Studies and the Regional Academy for Democracy. Mr. Bega speaks English, Italian, Spanish, French, and Russian. He was born in Tirana, Albania.

All session by Sokol Bega