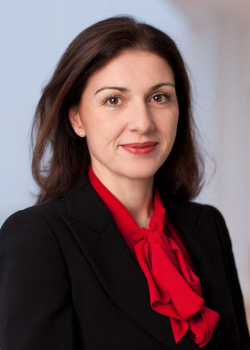 Sandra Breka was appointed Senior Vice President of the Robert Bosch Stiftung in April 2013. In this position she is Head of the Berlin Representative Office and responsible for the liaison with private and public partners in Berlin. Furthermore, her portfolio includes the Robert Bosch Academy, a newly established multilateral and interdisciplinary think tank, as well as the foundation’s efforts with regard to peace & conflict transformation with an outreach to a wide range of countries. She joined the Robert Bosch Stiftung as Program Director in January 2001. As Head of its Berlin Office from 2006 to 2013, she was responsible for programs focusing on Southeast Europe, transatlantic relations and India as well as Global Issues. Previously, Sandra Breka served as Program Director for Southeastern Europe, transatlantic relations and security issues at the Aspen Institute Berlin after an assignment with the American Council on Germany in New York City. She is affiliated with several international institutions. She is a Member of the Board of Directors and the Executive Committee of the European Endowment for Democracy (EED). After her studies in Germany, France and the United States, she obtained her MA at Columbia University in New York. She was a Yale World Fellow in 2008.

All session by Sandra Breka