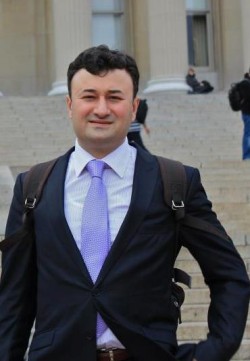 Assoc. Prof. Dr. Rovshan Ibrahimov was born in Baku, Azerbaijan in 1975. Dr. Ibrahimov received a bachelor’s degree in International Relations at Ankara University in 1998. He was awarded a master’s degree at the same University in 2001 (Thesis topic: the EU TACIS Program and Azerbaijan). In 2008 he received a PhD in Political Science from Ankara University (Thesis topic: The relations between the EU and the Southern Caucasus Republics). Dr. Ibrahimov has worked at Qafqaz University since 1999. He has held the post of director at the Center of Energy Studies, he as been head of the Regional  Studies Department, and Vice-Rector on External Affairs.  From 2003 to 2013 he founded and was head of the International Relations department. Since 2011 Dr. Ibrahimov has been head of Foreign Policy Analysis at the Center for Strategic Studies under the President of the Republic of Azerbaijan. From 2010 to 2012 he was co-producer of `Gundem` a TV program on foreign policy. His research interest include energy policy and security, Azerbaijan’s foreign policy, international politics, theories of international relations and conflict studies. He has lectured at Wrocław University in Poland, Siegen University (Germany), SDU (Kazakhstan) and the Oil Academy and Odlar Yurdu (Azerbaijan). He is the author of more than two hundreds articles and commentaries.

All session by Rovshan Ibrahimov