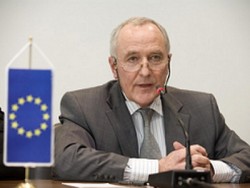 Pierre Mirel (1946) PhD in Public Law. He worked at the French embassies in Cairo (1971-74) and in Saïgon (1974-76), then at the International Institute for Public Administration, Paris (1977-81). He joined the European commission in 1981, where he spent a large part of his career on EU enlargement: setting up the PHARE assistance programme; Head of relations with Poland, Estonia, Latvia, Lithuania; Director for the accession negotiations with Hungary, the Czech Republic, Slovakia and Slovenia, then for Croatia and Turkey until 2006. He then took over relations with Albania, Bosnia and Herzegovina, Kosovo, Montenegro and Serbia, until he retired at the end of 2013. He is a lecturer at Sciences Politiques-Paris and has published “L’Egypte des Ruptures” (1982) and a chapter on “the EU enlargement and neighbourhood policies” in Jacques Rupnik’s book “Géopolitique de la Démocratisation, l’Europe et ses voisinages” (Presses de Sciences Politiques-Paris, novembre 2014).

All session by Pierre Mirel