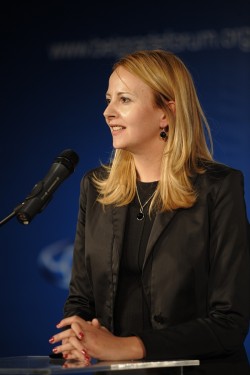 Maja Bobić is an anthropologist with an MA in Southeast European Studies from the National and Kapodistrian University of Athens, Greece. She has been employed at the EMinS since 2003, first as a Local Council Coordinator, later as a Project Coordinator/Researcher. In 2007 she was appointed Secretary General in charge of the overall planning, fund-raising and management of EminS and its representation to partners, associates and beneficiaries. She was a Freedom House fellow at the ‘Advocacy and Lobbying’ school seminar in the USA, an alumna of the School of political studies of the BFPE and CoE, and a graduate from IVLP. Ms Bobić is regional co-chair of the German Marshal Fund’s MMF programme and has been a member of the International European Movement Board since 2014. Besides expertise in project development and management, her areas of interest encompass civil society development, civil dialogue, European integration and enlargement, and regional cooperation. She is fluent in English, and has a working knowledge of French and Greek.

All session by Maja Bobić