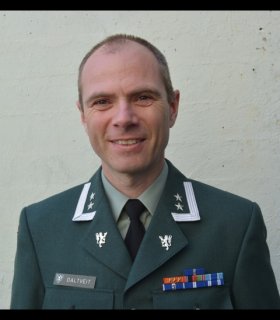 Lieutenant Colonel Egil Daltveit is the Norwegian Defence Attaché in Belgrade since 2018. He was born in 1970, and he has served in the Norwegian Army since 1989, first as an NCO and later as an officer.

He was deployed to the Faryab province in Afghanistan in 2012 as the Chief of Staff of the Norwegian-led Provisional Reconstruction Team, and to ISAF HQ in Kabul in 2008. Before that, he served on 4 different missions in KFOR and UNMIK in Kosovo from 2000 – 2004.

He has served on all levels in the Norwegian armed forces, from the squad level up to the Ministry of Defence. In 1998 he made headlines when he as company commander of a reserve officer training programme admitted a class where one third were women. The standards were the same for all. Almost 40 % of those who graduated successfully were women.

He has been the army representative for several large studies of the future of the armed forces. This includes being the lead for a three year project looking at land power 20 years ahead, assessing the reintroduction of an NCO-corps in the Norwegian armed forces after it was abolished in the 1970-s, restructuring of the military education in Norway, and being lead analyst for the planning of the current long-term plan for the Army. His last position before going to Belgrade was at the Norwegian Military Academy as head of all instructors, and responsible for the content of the teaching and research at the academy.

Lt Col Daltveit is a graduate of the Norwegian Military Academy class of 1994. He also has long-term studies at the Armed Forces Language centre and shorter courses in philosophy, linguistics and languages from the universities of Oslo, Bergen and St Petersburg. He is a graduate of the US Army Command and General Staff College (CGSC) in 2007. He was the first (and so far last) non-US officer to be presented the award for the best Master thesis from the US Army CGSC.