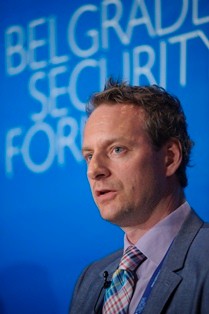 Karsten Friis is a Senior Adviser at the Norwegian Institute of International Affairs (NUPI). Currently he heads NUPI’s work in the MNE6 project which focuses on the development of civilian–military cooperation in international operations and coordinates activities with the other project partners – FFI (the Defence Research Establishment) and FST (the Joint Staff College). Friis also follows political developments in the Balkans, with emphasis on Serbia, Montenegro and Kosovo. He has worked as Political Adviser at OSCE Serbia from 2004-2007 as well as for the Montenegro mission in 2000. From 2001 until 2004, he served as an Adviser to the Norwegian Armed Forces, and from 1999-2000 was an Analyst at KFOR Headquarters in Kosovo. Friis has published widely on ‘whole of government’ and comprehensive approaches to state-building and crisis management. He received his MA in International Relations from the London School of Economics and CandPolit (M.Phil.) in Political Science from the University of Oslo.

Session 3: Cyber War and Cyber Crime: Responding to the Governance Challenges (in partnership with DCAF)