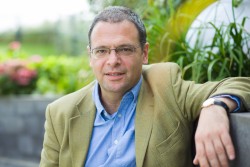 Julian Popov is chairman of the Board of Directors of BPIE. He is a fellow of the European Climate Foundation and currently leads the South East Europe Grid Initiative which catalyses high level energy policy cooperation among countries in wider South East Europe, including Turkey and the Western Balkans. Julian is a former Minister of the Environment of Bulgaria and currently advises the President of Bulgaria on energy security issues. He is the founding CEO and currently a board member of the New Bulgarian University, former chairman and currently a Board Member of the Bulgarian School of Politics and co-founder of the Tunisian School of Politics.  He is member of the Advisory Board of GridTech, a member of the Advisory Board of the BETTER Project, a founding member of the Governing Board of the Sofia Platform, a member of the Steering Committee of the Grantmakers East Forum and Honorary Treasurer and Director of the UK charity Friends of Bulgaria. Julian is the author of two books and writes regularly on current affairs and climate and energy policy.