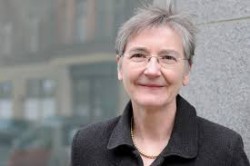 Judy Dempsey is a nonresident senior associate at Carnegie Europe and editor in chief of the Strategic Europe blog. She is also the author of the book The Merkel Phenomenon (Das Phänomen Merkel, Körber-Stiftung Edition, 2013). She worked for the International Herald Tribune from 2004 to 2011 as its Germany and East European correspondent and from 2011 to September 2013 as a columnist. Dempsey was the diplomatic correspondent for the Financial Times in Brussels from 2001 onward, covering NATO and European Union enlargement. Between 1990 and 2001, she served as Jerusalem bureau chief (1996–2001), Berlin correspondent (1992–1996), and Eastern European correspondent in London (1990–1992) for the Financial Times. During the 1980s, Dempsey reported on Central and Eastern Europe for the Financial Times, the Irish Times, and the Economist. Dempsey graduated from Trinity College, Dublin, where she studied history and political science. She has contributed to several books on Eastern Europe, including Developments in Central and East European Politics (Palgrave Macmillan and Duke University Press, 2007) and The Soviet Union and Eastern Europe: A Handbook (Frederick Muller Ltd, 1985).

All session by Judy Dempsey