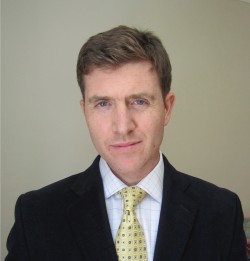 Jonathan Marley is a serving officer with the Irish Defence Forces and a PhD candidate at the London School of Economics where his research focuses on International Organisations policies in post-conflict territories with a particular emphasis on implementation strategies.  He is a member of the International Institute for Humanitarian Law (San Remo), Working Group on Private Military Security Companies and is also a member of the Centre for the Democratic Control of Armed Forces (DCAF), Security Sector Reform, Community of Practice. Currently he is writing on UN peacekeeping reform for the Centre of International Cooperation, New York University. During his military career he served with NATO in Kosovo in 2004 and 2007 and was a member of the Irish Defence Force’s EUFOR Tchad/RCA Operational Planning Team in 2007/08. As a Staff Officer in the Directorate of Operations, Defence Forces HQ, he was responsible for policy development and co-ordinating engagement with NATO and the EDA while also serving as a military advisor on the National Security Authority. Most recently he served as Aide de Camp to the Head of Mission/Force Commander of UNIFIL in south Lebanon.

All session by Jonathan Marley