Ambassador, Head of Mission, Embassy of the Swiss Confederation in Serbia 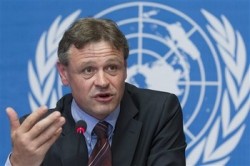 Ambassador, Head of Mission, Embassy of the Swiss Confederation in Serbia

Jean-Daniel Ruch joined the Swiss Federal Department of Foreign Affairs in 1992. His previous professional experience included 3 years with the Ministry of Defence of Switzerland. After initial postings in Bern, Seoul and Bonn, he became part of the team for the first Swiss OSCE presidency in 1996, based in Vienna. In 1998, he was seconded to the OSCE Office for Democratic Institutions and Human Rights in Warsaw. Returning to the Swiss diplomatic service, he was assigned to the Embassy in Belgrade, where he served from 2000 to 2003. He was then seconded to the UN International Criminal Tribunal for the former Yugoslavia. In 2008, he went back to Bern to become Switzerland’s Special Representative for the Middle East, a position he left in November 2012, when he returned to Belgrade as Switzerland’s Ambassador to Serbia and to Montenegro.

All session by Jean-Daniel Ruch