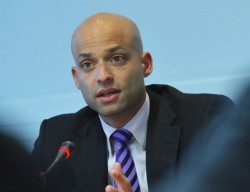 James Appathurai was appointed Deputy Assistant Secretary General in December 2010. As DASG, he is responsible for NATO’s political relations with countries across the globe, international organisations, enlargement, and arms control.  He provides policy advice on political issues affecting the security of the Alliance.  He is responsible for implementing and developing NATO’s relations with all its partner countries and organisations, including through Political Agreements, Partnership Cooperation Programmes, and other bilateral and multilateral arrangements.  As the Secretary General’s Special Representative, he is responsible for carrying forward the Alliance’s policy in the two strategically important regions of the Caucasus and Central Asia.  Mr. Appathurai previously served as NATO’s Spokesperson from 2004 to 2010. Prior to that he served as Deputy Head and Senior Planning Officer in the Policy Planning and Speechwriting Section of NATO’s Political Affairs Division from 1998 to 2004. He served in the Canadian Defence Department from 1994 to 1998. He has written more than 25 articles and book chapters on security issues, including on NATO, peacekeeping, Euro-Atlantic security, Canada and regional security cooperation.

All session by James Appathurai