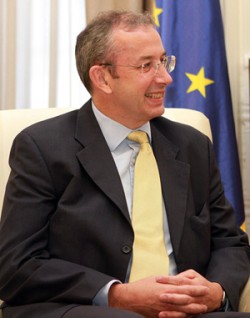 H.E. Michael Davenport is the Head of the European Union Delegation to the Republic of Serbia since September 2013. Prior to this posting, he had served as the Ambassador of the United Kingdom to Serbia since January 2011. Before coming to Serbia, Davenport was Director for Russia, Central Asia and the South Caucasus in the Foreign and Commonwealth Office (FCO) in London. Between 2007 and 2010 he advised successive Foreign Secretaries on Britain’s relations with Russia and the wider region and was responsible for the FCO’s network of twelve diplomatic missions. His first foreign posting as a British diplomat was to Poland in 1990, where he was responsible for establishing the first British Know-How Fund, supporting Poland’s early political and economic reforms after the fall of Communism. In the mid-nineties Michael headed the FCO’s UN Peacekeeping Section before learning Russian ahead of a posting as First Secretary to Moscow in 1996. In 2000 Michael returned to Poland as Commercial Counsellor and Consul-General in the run-up to Polish accession to the European Union, and in 2004 was appointed Deputy Ambassador to Cairo. Michael did his first degree in French and German language and literature at Cambridge University, after which he taught English at Graz University in Austria. Later he studied law at the College of Law in London and qualified as a Solicitor of the Supreme Court in 1988, having trained at the City firm of Macfarlanes.

All session by H.E. Michael Davenport