Ambassador of the Republic of Italy in Serbia 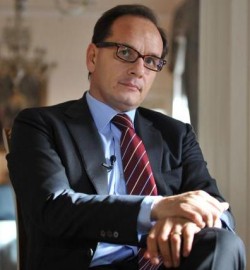 Ambassador of the Republic of Italy in Serbia

H.E. Giuseppe Manzo is the ambassador of Italy in Belgrade since June 2013. From January 2012 to April 2013, he was Head of the Press and a spokesman for the Minister, directing communications strategies of Farnezina toward more active e-diplomacy, and through new media and social networks as well. In 2010 and 2011 he led the Press Office of the Embassy of Italy in Washington, DC, where he was serving from 1998 to 2002. He worked in the Permanent Mission in New York between 2005 and 2009, and was a member of the Italian delegation to the United Nations Security Council for two years from 2007 to 2008. During this period, at the initiative of Italy, the headquarters of the UN to negotiate and was adopted the first resolution on a moratorium on the death penalty. In Farnezina worked in the Directorate for Cooperation and Development, the Department of Economic Affairs and the General Secretariat. Giuseppe Manzo is the author of articles on the role of the media in the fight against terrorism and communications within the UN. He was an teaching assistant on the International Communication Master Course at the University IULM in Milan.

All session by H.E. Giuseppe Manzo