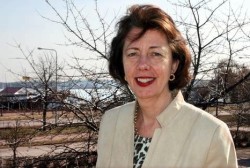 Elisabeth Nauclér is a member of the Parliament of Finland. Born in Sweden and trained as a lawyer, Elisabeth Nauclér is the Åland Islands’ first female member of parliament. She currently serves as a member of the Constitutional Committee, the Employment and Equality Committee, and is a member of the Grand Committee (European affairs, representing the autonomous territory of the Åland islands). Since 2007, Ms. Nauclér has been a deputy member of Finnish Delegation to the OSCE Parliamentary Assembly and a member of the Swedish Parliamentary Group. After completing a master’s in Law at Uppsala University, Nauclér received additional degrees in Finnish Language Studies from Uppsala and the University of Helsinki. In 1979, she became a legislative drafter for the Government of Åland, before becoming a notary for the Parliament of Åland from 1983 to1985. She went on to become Secretary of the Åland Delegation to the Nordic Council from 1985-1999, while also working as a Civil Affairs Officer with the UN peacekeeping operation in former Yugoslavia from 1996-1999. Before joining Parliament, she served as the head of office in the Government of Åland.

All session by Elisabeth Nauclér

Plenary panel 2: Gender at the Margins: The Role of State