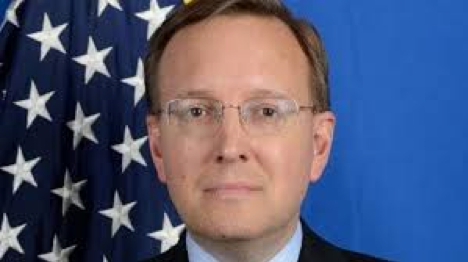 David Kostelancik, a career member of the Senior Foreign Service of the United States, rank of Minister-Counselor, became the Director of the State Department’s Office of South Central Europe in August, 2019.  During his three years in Budapest, 2016-2019, he served one year as Deputy Chief of Mission and two years as Charge d’affaires.  Other assignments include Director of the Office of Russian Affairs and Deputy of the Office of North Central Europe at the State Department, Acting Minister Counselor for Political Affairs at the U.S. Embassy in Moscow, as well as postings to the U.S. Mission to the OSCE, the U.S. Mission to NATO (Brussels, Belgium), the U.S. Embassy Tirana, Albania and the U.S. Embassy Ankara, Turkey.

Mr. Kostelancik received Bachelors of Arts degrees from Northwestern University in Applied Mathematics and Political Science, a Masters of Arts degree from The University of Michigan in Russian and East European Studies, and a Masters of Science degree in National Security Policy.  He speaks Russian, Albanian, Turkish and Hungarian.

All session by David Kostelancik