Head of the European and Security Research Department, Institute for Democracy and Mediation, Tirana 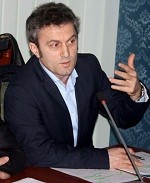 Head of the European and Security Research Department, Institute for Democracy and Mediation, Tirana

Arjan Dyrmishi is head of the European and Security Research department at the Institute for Democracy and Mediation in Tirana. His research interests include international relations, security studies, democratization, political parties and the European Union. Before joining the institute he held various positions with several departments of the Albanian government, including the Prime Minister’s office, the Ministry of Defence and the State Intelligence Service. Arjan holds a master’s degree in Political Sciences from the University of Siena, Italy.

All session by Arjan Dyrmishi