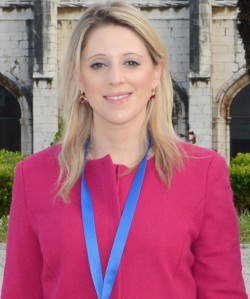 Ana Isabel Xavier is an Assistant Professor in the Political Studies Department in Nova University (Lisbon, Portugal) and a Research Fellow in the Portuguese International Relations Institute (IPRI). She holds a PhD in International Relations (European Studies), from the University of Coimbra, Portugal, with a thesis entitled The European Union and Human Security: a crisis management global player in search of a strategic culture? For several years she has been a member of the European Commission’s Team Europe developing training activities on European Studies, Human Rights, Non-Formal Education and Citizenship. Her main research areas and publications cover the European Union, Security and Defence, Human Security, Human Rights and Globalization. She attended the National Defence Youth Course in 2004, the Civilian Crisis Management Course in 2009/2010 and the National Defence Course in 2011/2012 in the Portuguese National Defence Institute. Ana Isabel Xavier is frequently invited to speak at conferences and lectures by civilian and military institutions, and appears on radio and TV programmes. She is the head of the European Studies section of the Portuguese Political Science Association (APCP) and a member of the Portuguese Security Studies Network (PT-SSN), the Academic Association for Contemporary European Studies (UACES), the International Studies Association (ISA) and the European International Studies Association (EISA). In 2015 she was awarded the Marshall Memorial Fellowship by the German Marshall Fund of the United States.

All session by Ana Isabel Xavier