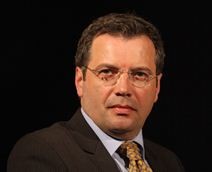 Agron Bajrami became editor-in-chief of Koha Ditore in September 2004, after 10 years of journalistic and editorial work with the Koha Media Company. He started reporting on cultural issues at KOHA weekly magazine from 1993, and joined the magazine as full-time journalist in 1996. He has been cultural editor at Koha Ditore daily newspaper since its first issue, in March 31, 1997. At the beginning of the armed conflict in Kosovo, in 1998, he became member of the editorial board of Koha Ditoredaily, participating in editorial decisions for the whole newspaper. In January 1999, Mr. Bajrami became deputy editor-in-chief of the newspaper. One month after the start of the NATO bombing campaign against Serb forces in Kosovo, Mr. Bajrami was part of the Koha Ditore staff that managed to restart the publication of the newspaper in exile, in Macedonia. After the war, Koha Ditore operation returned to Prishtina.. Mr. Bajrami has also written commentaries for American, German and French newspapers  and regional press, as well (Montenegro, Albania, Macedonia, Slovenia, Serbia). Since 2003, he is also a member of the Commission on Radio and Television Policy, headed by Erhard Busek and Ellen Mickiewicz. Mr. Bajrami is also a board member of Kosovo Press Council and elected member of the Board of South East European media Organisation (SEEMO). Mr. Agron Bajrami graduated from the Fine Arts Faculty in University of Prishtina, in 1991.

All session by Agron Bajrami