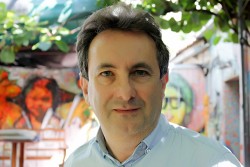 With the downfall of Muslim Brotherhood in Egypt, and the militant approach of Islamists in Iraq, Syria and Libya, many analysts say the future of political Islam in the Arab world is tenuous. Can Islamists moderate their ideology and define a political model that Europe would find acceptable? And is this actually possible with Islam or was Samuel Huntington right in saying that these two civilizations can only clash and cannot co-exist?

Federica Mogherini, the High Representative of the European Union for Foreign Affairs and Security Policy stood firm saying that this is not the case: “The idea of a clash between Islam and “the West” – a word in which everything seems to be put together – has misled our policies and our narratives. Islam holds a place in our Western societies. Islam belongs in Europe. It holds a place in Europe’s history, in our culture, in our food and – what matters most – in Europe’s present and future. Some people are now trying to convince us that a Muslim cannot be a good European citizen, that more Muslims in Europe will be the end of Europe. These people are not just mistaken about Muslims: these people are mistaken about Europe, they have no clue what Europe and the European identity are.”

If this is the case, maybe Europe should also do something about changing its position on Islam. Today more than ever, Europe definitely needs a common policy towards this issue. The example of the refugees that are coming to Europe in their hundreds of thousands and the treatment they receive is a very vivid reminder of the need for such a common policy. Or, in the words of Ms Mogherini: “Maybe we should also take time to brush up on the “acquis” with some Member States. We have a problem of internal coherence. … We have supported the “bring back our girls” campaign for the Nigerian girls kidnapped by Boko Haram, there is such a contradiction between our solidarity when these girls are far away, and our lack of solidarity when they are at our door.” By giving the refugees the treatment they deserve Europe will also send an important message to the Islamic world – inside and outside Europe. This will be the message of tolerance and cohabitation – values that have somehow been gradually forgotten in Europe though they are fundamental values of European integration.

1. Does Europe denote the difference between “European” Islam and Islam outside of Europe?

2. Is the Eurocentric approach to Islam one of the main challenges we face?

3. How will the current migrations affect relations between various communities?

4. How can Muslim communities contribute to preventing radicalization in Europe?